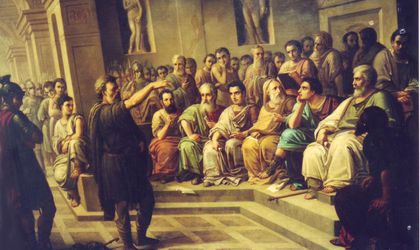 Temporary exhibition The National Myth: Visual Arts and Romanian Identity aims to provide a visual history lesson, with a series of works by major national artists outlining Romania’s changing identity over the course of a hundred years.

The exhibition takes its inspiration from two books by Romanian historian Lucian Boia, History and Myth in Romanian National Consciousness, and Toward a History of the Imaginary, and investigates the glorification of national history, beginning in the latter half of the 19th century and extending into the 20th century. The political role of art during the 19th century is marked in works including portraits of revolutionaries of 1848, allegories embodying the ideals of unity and independence, landscapes designed to show the beauty of the homeland, and in particular historical scenes inspired by contemporary events. For example, Michael the Brave became the symbol of unity for Romanians, while Stephen the Great and Vlad the Impaler were heroes in the fight for independence.

The foremost modern Romanian artists also show a drive for subjects drawn from the folk tradition, presenting the rural world in its true colors. The national identity is embodied by the rural universe and the idealized image of the Romanian peasant, especially endorsed by the immense popularity of Nicolae Grigorescu’s works, which formed the basis of the future development of Romanian fine arts.