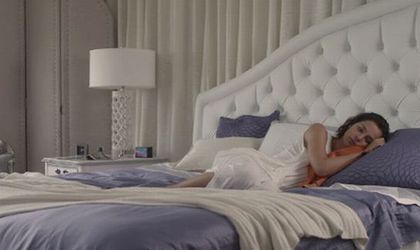 The movie “Stepping out” brought Best Actress (Maria Dinulescu — from Romania) and Best Director (Nataliya Padilla) at “The LA Indie Film Festival” and now the movie is going to “Short Film Corner” at Cannes, the Romanian Cultural Institute Announced.

Maria Dinulescu: “It feels so good to see that all the efforts made in the past two years are beginning to bear fruit! Now I finished filming a new short film and I’m getting ready to start another one! Those are small steps, but in the direction I always wanted! It always feels good to be back to Cannes!”

Maria Dinulescu studied acting at the National University of Cinema and Drama in Bucharest, Romania. She came to international attention in 2003, when one of the first shorts she played in, “Traffic”, won the Palme d’Or in Cannes. She came back to Cannes in 2007, as the lead female actress in the full-feature “California Dreamin’ (endless),” the winner of the “Un Certain Regard” section. Her performance in this movie won her a few other awards including the Best Actress Prize at BIAF Georgia and Arte Mare from France.

Maria subsequently played the lead role in “Hooked”, a film that had its world premiere at the 65th Venice film Festival. Her performance in “Hooked” was described as “bewitching” (Hollywood Reporter) and “bubbly (in a difficult role)” (Variety) and was rewarded with the Best Actress Prize at the Thessaloniki Film Festival and the Buenos Aires Film Festival.

Of the 12 full-length feature films that Maria has starred in, she has played the lead 7 times. She also has several television credits, including the HBO-produced Romanian version of the “In Treatment” HBO series. She has acted in more than 14 successful short films, commercials, and was the lead in the music video, “Peace” by Depeche Mode. In 2010 Ms. Dinulescu won the Esquire Magazine, Sexiest Woman Alive Atlas, 2010 for Romania. She is a European Film Academy member, juror for several film festivals and each year juror forÂ International EmmyÂ® Awards Competition.

Dan Fati, Dacris CEO, won the title of “Professional of the Year” at...