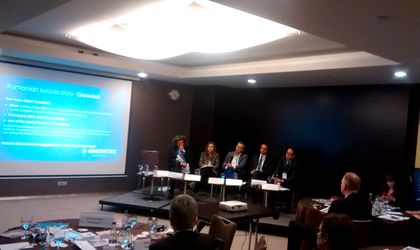 Business Review offers you the key statements made by speakers at the seventh German & Austrian Forum. The text is updated in real time.

Titus Loew, CFO, Siemens Romania: “We have four production sites in Romania. We are building a new greenfield site in Sibiu”. He added the company is looking to hire 200 people in Cluj for software development by 2017. The executive pointed out there is a shortage of skilled employees in the country.

Raluca Ene, managing director for Romania at communications firm Chapter 4, said that the PR industry in Romania was started by multinationals, but at this moment local companies are offering expertise to international ones.

Victor Cotrutz, CEO, Greentek, said that R&D is key for Europe to succeed. “Brain drain is a real issue in Romania”, said the head of Greentek. He added that due to the new government, the company will look to do more business in Romania.

Ionut Dumitru, chief economist at Raiffeisen Bank: “Our import of gas is currently close to zero. (…) The decrease of the oil price is quite supportive for the economy overall”, said the economist.

“For Romania, the China slowdown is not neccesary a bad thing”, added Dumitru, who underlined that around 1 percent of Romania’s exports go to China.

“There will be a kind of indirect impact through Germany”, said Dumitru, on China’s economic slowdown and its impact on European economies.

Sales of durable goods are skyrocketing. Overall, consumption in the economy is growing by 6 percent, said the chief economist of Raiffeisen Bank, adding that the budget deficit will reach 3 percent this year, further expanding to around 4 percent in 2017.

“Currently, consumer sentiment is at pre-crisis level, as in 2007“, said Dumitru.

Sebastian Metz, general manager at the Romanian-German Chamber of Trade and Industry, said the priority of the current government is to improve the abosorption of EU funds. “This is money than can increase the economic development in this country”, said Metz.

The head of AHK Romania said he sees the economy grow by up to 3.9 percent this year, based on increased domestic consumption.

“We have definitely financial support of internal consumption, we have a reduction of VAT, so there will be a lot of more available income”, said Metz, who added that most of the German investors have expanded operations locally, and there were not so many new investments.

He urged Romania to increase its rate of production.

“This government puts a lot of effort to have a good political relation with Germany”, said Metz.

HE Gerhard Reiweger, the Ambassador of the Republic of Austria to Bucharest, said there are close economic relations between Romania and Austria.