Getting to know Enescu 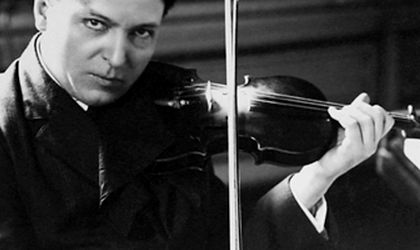 Along the trail of my ongoing adventure to become acquainted with this enigmatic man and his music, I have rediscovered Enescu as a compelling case study in contrasts – especially given the many counterpoints among his life, his music and the public’s perception of it.

George Enescu (1881-1955) was not only a child prodigy, but also a man of many talents as a composer; a conductor; a virtuoso violinist (as well as accomplished pianist, cellist, singer); and a beloved teacher. Yet “in the depths of his heart, only the composer mattered”, according to Nadia Boulanger, a composer who was Enescu’s friend and former classmate.

Despite the vast treasury of Enescu’s musical compositions, too much of his music remains unjustly neglected, unfamiliar or misunderstood, for several reasons including the diversity and complexity of his musical style (repeatedly misbranded with a diluted scope).

“Enescu composed for a world that will probably never exist, a better one, an imaginary one,” explained Theodor Grigoriu, a composer and disciple of Enescian music. Yet unlike the riddle embedded within his mythical opera Oedipe (a riddle that must be solved), perhaps the enigma of Enescu’s music simply merits contemplation. Fortunately, we now have ample opportunities to do so.

George Enescu: His Life and Music by Noel Malcolm

Noel Malcolm’s book George Enescu: His Life and Music, published both in English (Toccata Press 1999) and Romanian (Humanitas 2011), is an excellent introduction for the general reader or meloman, which provides the chronologically concise story of this habitually misconstrued musician. I would qualify this book as a must-have based on Malcolm’s extensively researched and well-written narrative, which also includes three reference-quality appendices (Enescu compositions, recordings and bibliography).

While there are other worthwhile books about Enescu, I especially like Malcolm’s simple narrative, which traces a central theme of contrasts among Enescu’s life, his music and the public’s perception of it – contrasts which run parallel to the counterpoint in Enescu’s music. Although born into a middle-class family, enthusiastically embraced by the Romanian royal family and later married to an aristocrat, unbelievably Enescu died in impoverished circumstances. In spite of two turbulent World Wars and his own personal crises, Enescu’s music is often calm and clear. Despite the free-flowing and seemingly improvisational spirit of his music, Enescu meticulously labored at his compositions (with an ink pen and scraping knife), and, typically dissatisfied, would continue editing some of his major works for several years.

Enescu’s innate perfectionism was most likely aggravated by public audiences and music critics who did not appreciate (or understand) his development of polyphony and heterophony, particularly in his early adult compositions. As Malcolm illustrates with three compositions that Enescu consecutively performed in 1909, one was perceived as ‘too modern’, another was criticized as ‘a regression which did not make any step towards a more modern style’, and yet another received a ‘hostile reception’ owing to its seemingly inadequate classical style. Subsequently, 1910 was an aberrant year for Enescu as he did not write any new compositions. Yet he persevered and shortly thereafter became an established musical figure both abroad and at home.

Among the more audacious contrasts depicted by Malcolm, Enescu’s posthumous rebranding by the Romanian communist regime initially denounced his popular music as a bourgeois remnant (1950s); then diluted and diminished his music through a nationalist, folkloric scope (1960s); and thereafter neglected his musical scores and recordings, which were left to gather dust in various archives.

Perhaps the only aspect missing from Malcolm’s book is the undisclosed back story of his multi-year adventure encompassing research in Romania, England, France and Sweden. As briefly mentioned in the preface, a great deal of Malcolm’s research was conducted at the archives of the George Enescu National Museum in Bucharest during 1981 and 1982, despite the fact that the museum was officially closed from 1977 to 1989.

Whereas Malcolm’s scope was to broaden the narrative and disentangle the misperceptions surrounding Enescu, Sherban Lupu’s has been to resurrect Enescu’s neglected and unknown music. Lupu’s lengthy research effort rediscovering and reconstructing the unpublished and mostly unfinished musical scores of Enescu (archived at the George Enescu National Museum in Bucharest), resulted in the publication of several volumes of musical scores (which can now be studied and performed), and recordings based on these scores. Eminently qualified for this adventure as a music professor and violinist, Lupu was also a student of Yehudi Menuhin (Enescu’s protégé and friend).

Unknown Enescu (two CDs plus booklet), released in 2011 and co-produced by the Sherban Lupu Cultural Foundation and Editura Casa Radio, is a must-have for its content, performance and recording quality. The CDs cover nineteen unknown Enescu compositions spanning a 60-year period from 1891 to 1951, magically performed by Lupu and other musicians. The 100-page booklet (printed both in Romanian and English) features interviews with Lupu that animate these unknown compositions and elucidate Lupu’s motivation for undertaking this monumental and lovely work.

As Lupu explains, although many of these unpublished compositions were also unfinished, this does not mean that Enescu considered them unimportant (since, after all, he saved them). Enescu probably regarded these works as experiments in different compositional styles and as exercises which led to longer and more complicated opus works. Moreover, these forgotten pieces reveal a more innovative yet intimate side of Enescu, who was a very private person animated by simple traits. Unlike the 33 opus works which have formed the classical Enescian repertoire, these compositions are more approachable and appealing to the younger generation of performers and listenersAmong my favorites from this compilation is the Fantaisie concertante for violin solo (CD1/track6) which Enescu drafted at age 51 as a concert symphony for orchestra and violin, but which remained unfinished until Lupu reconstituted it as a violin solo. This hauntingly beautiful composition (which according to Lupu was a precursor to the violin language in Oedipe) seems quite modern and dissonantly similar to the Fantasia on Song of the Birds composed by Akira Nishimura (a contemporary Japanese composer, born in 1953). Even Lupu recounts that Japanese audiences have recognized elements of Nippon in Enescu’s music. You can listen to and compare these two fantasies online on YouTube.

Another favorite is the Andantino malincolo for violin and piano (CD1/track3), which you will probably recognize as the music from the ad campaign promoting this year’s festival. Enescu completed this composition at age 70, and he specifically designed it as a ‘puzzle piece’ to test sight-reading on the entrance exams for the Paris Conservatory.

The six series organized for the 21st George Enescu Festival will present us with a rich offering of orchestral and chamber music, opera, ballet and theater. Through more intimate recitals and workshops, two of these series will provide special opportunities, to connect with Enescu’s music; his legacy as a composer; and his dedication to promoting new talents. The series 21st Century Music (albeit misnamed) will feature recitals encompassing Enescian music and that of contemporary composers from both the 20th and 21st centuries.

The series Enescu and His Contemporaries will feature the new generation of Romanian and other international composers, and for several reasons, promises to be among the highlights of this year’s festival. First, it will provide a rare opportunity to hear the exceptional music of contemporary Romanian composers (such as Doina Rotaru) who remain mostly ‘unknown’ at home, and ironically ‘less known’ abroad. Moreover, this is where I imagine intersecting with Enescu’s dynamic spirit and influence as a composer.

You don’t need to be an Enescu fan or meloman in order to venture along these serial pathways to new musical connections and intersections. Ultimately, you may discover how music entangles you with distant people and places, thereby changing both you and them. Perhaps this is the true magic and physics of music.

If you are unable to attend some of the concert hall or televised performances, don’t despair! Radio Romania Muzical (104.8 FM Bucharest) will broadcast live approximately 63 concerts, which will be posted on its weekly program schedule for September (http://www.romania-muzical.ro/program/).

Structured as one-hour broadcasts, this program series is archived online at http://www.romania-muzical.ro/emisiuni/es-arh.shtml?sh=4561&y=2013.

Despite the rich legacy of Enescu’s influence on contemporary musicians, paradoxically much of his music remains neglected by the general public, due partly to its diversity and complexity. More often than not, such complexity (which we can see in his musical scores) is imperceptibly wrapped around simple melodic themes (which our ears can more easily comprehend).

What is distinctive about Enescu’s music is that it synthesized the familiar with the unfamiliar, and the old with the new. As a musician friend so aptly explained to me, “Enescu created a unique synthesis among classical counterpoint and heterophony rooted in Romanian traditional music … a synthesis which resulted from his own genius, his classical music studies, his profound understanding of and love for Romanian popular music.” I would add that Enescu’s heterophony provided a vital link to modernism, and perhaps also a link to his contemporary composers in Japan (as elsewhere).

Although Enescu has been categorized either as a neoclassical or as a modernist composer, the essential distinction is that his music served as a transition from neoclassicism to modernism. I would also distinguish this transition from the debatable paradigm shift of atonal/serial music (a subset of modernism). As author Noel Malcolm explains, despite Enescu’s prodigious memory for musical stories, “He could not recall anything from certain serial music compositions, because they did not mean anything to him.”

Transition in music and society is especially important to Daniel Barenboim, who will open this year’s festival. As Barenboim explains, “One of the main principles of making music is the art of transition … it basically comes out of the nature of paradox; that you have to have the extremes; that you have to find a way to put the extremes together, but not necessarily by diminishing the extremity of each one …You have to keep the extremes but find the link, always find the link (no matter how imperceptible or unnoticeable), so that there is an organic whole…These two words, ‘imperceptible’ and ‘unnoticeable’ are very important because this is the art of transition.”

This article is dedicated to parents and teachers who invest in children’s music education, especially those who patiently endure the cacophony of children destined not to become musicians, but to discover the practical connections among music and the other disciplines.

To commemorate the 132nd anniversary of Enescu’s birth date on August 19 , Radio Romania Muzical broadcast a special one-hour program that sketched a musical portrait of Enescu based on some of his early adult compositions: one he favored (Orchestral suite nr. 2, op. 2/1915) and that he continued to revise for forty years; one he grew to disdain (Romanian rhapsody op.11, nr. 1/1901) as it would overshadow his other works and misbrand him as a musician; and one he never published (Distant serenade for piano, violin and cello/1903). These compositions were brought to life by the exceptional recorded performances of the Monte Carlo Philharmonic Orchestra, conducted by Lawrence Foster (an American conductor of Romanian ancestry); the George Enescu Philharmonic Orchestra, conducted by Sergiu Celibidache; and the violinist Sherban Lupu. I warmly recommend this broadcast as a caringly curated, brief and free opportunity to learn more about Enescu and his music (archived at http://www.romania-muzical.ro/emisiuni/es-index.shtml?sh=4451).