Gayfest week to be presented in Bucharest 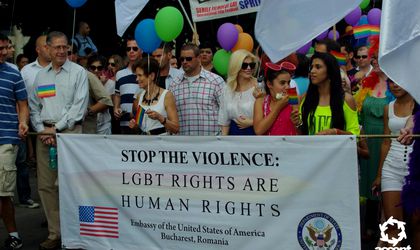 This week, the ACCEPT Association organizes the celebration and recognition of diversity festival Gayfest. This tenth run of the festival awaits its supporters, friends and sympathizers with movies, exhibitions, debates, parties and the Diversity March, which will take place on June 8. The annual parade will run from 5 PM to 7 PM along Kiseleff Boulevard, from the Arch of Triumph to Victoriei Square.

The documentary follow the evolution in time of the social perception regarding HIV/AIDS, of the steps made towards changing and improving it, but also towards obtaining legal protection for the highly exposed communities.
The projection will be followed up by a discussion about GBT men community (gay, bisexuals, transgender) in Romania, from the HIV/SIDA perspective, and about the current social and legal context.

Before watching the movie Beyond Gay. The politics of Pride, we invite you to a discussion about the meaning of Gay Pride, its importance but also about the need for public expressing and visibility.

Beyond Gay. The politics of Pride is a stunning documentary about the evolution of Gay Pride, from its early years and up until today, about its role and importance in the modern LGBT liberation movement.

A gay-friendly, straight-friendly or, better said, diversity-friendly comedy that will inevitably make us recall Almodóvar’s early years as a director.

The projection of the documentary Prodigal Sons will be preceded by a more than necessary discussion about transgender people in Romania, about visibility but also about the current legal frame in which they fit.

Prodigal Sons, the debut movie of Kimberly Reed as a director, is a stunning documentary about family, sexual and biological identities, childhood traumas, but also about the power of family love.

This year, Gay Pride takes place on the Kiseleff Boulevard, from the Arch of Triumph to Victoriei Square, according to the following schedule:

The participants’ gathering will take place at the Kiseleff Boulevard outset. Our volunteers will guide you towards the starting point.
This year, the Pride will end with a discrimination-free zone, near Victoriei Square, in the Kiseleff Park. There we will listen to a few speeches, initiative discussions and activities, thus creating a safe space in which each participant will be able to get involed.

After the Pride, ending with the discrimination-free zone, Atelier Mecanic becomes the free-party zone. For all of those who participated at this year’s GayFest edition, for its supporters and for other people as well, the most colorful party takes place at Atelier Mecanic!