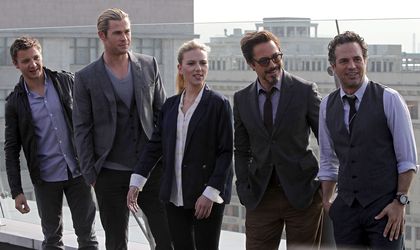 The earth is in peril. (Again.) An alien race wants to subjugate the planet and bring the human race to its knees with the Tesseract, a magic device that gives off a special energy. It seems a lot of effort to go to, when brief observation of the earth will reveal that vast swathes of the human race can quite easily be subjugated with a combination of TV talent shows, the desire to acquire garish items and nicotine, but, nonetheless, this is the way the aliens have chosen.

Helping them is Loki (Tom Hiddleston), whom regular Marvel fans will remember as the poorly adjusted brother of Thor, Norse god of thunder. Loki is a bit miffed because in the film Thor he found out he was adopted and wouldn’t get to become king, so he has gone rogue.

Well, the massed ranks of dormant superheroes are not going to stand idly by while ugly aliens mess with the earth. Hell no! So head spy Nick Fury (Samuel L Jackson) assembles a crack team of avengers to defend the planet, ensuring a nice pay day for about a dozen Hollywood stars.

So on one side we’ve got Loki and the aliens, and on the other we’ve got the Incredible Hulk (Mark Ruffalo), who becomes big, green and angry; clean-cut nationalist ubermensch Captain America (Chris Evans); hammer-wielding blond Thor (Chris Hemsworth); the Black Widow (Scarlett Johansson) whose gifts seem to be reading minds and wearing very tight suits, master archer Hawkeye (Jeremy Renner) and Iron Man (Robert Downey Jr), whose special power is getting through a huge pile of crumpled shirts in less than a minute. ­

Don’t worry, if you’re not familiar with the many characters and their back stories, that you’re not going to get it. This isn’t exactly Inception. You can probably surmise the plot without even seeing the film: good will prevail, American ideals will be endorsed, teamwork and selflessness will triumph over evil, somebody will nobly sacrifice himself but survive for the sequel, the ugly will perish, watch out if you’re a bit foreign, and so on.

It’s easy to be cynical about movies like this. It’s fun, too. But Disney’s been spewing out such blockbusters for years and so you’re guaranteed an entertaining near two and a half hours (yes, it’s a bit long). The set pieces are cool, the special effects top-notch and the script is not entirely witless: Thor delivers a line that got the biggest laugh I’ve heard in a cinema auditorium for a long time. Most of the actors are on multiple-movie deals, so stand by for plenty more avenging.