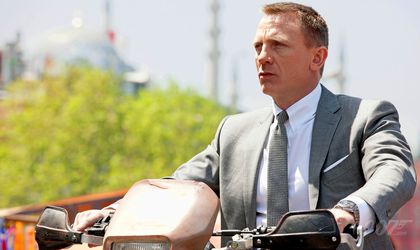 “Do you expect me to talk?” “No, Mr Bond. I expect you to die!” But, ignoring your track record of bringing down about a dozen mega-villains despite being captured first by all of them, I’m still going to leave you in a preposterous killing contraption of my own devising under the sole supervision of my most inept and inattentive henchman and go off and continue with my plans for world domination, rather than just putting a bullet in you now…

The era of laser death machines, big spaceships eating little spaceships and Roger Moore running over the alligators in a safari suit while quipping is over. Bond is dead, long live Bond. Blond Bond Daniel Craig, all sinews and post-Bourne seriousness. Casino Royale was great, Quantum of Solace was forgettable, so would Skyfall have the drama of a Felix Baumgartner plunge or would it flop?

MI6 has messed up big time, and a list of undercover agents operating around the world has fallen into enemy hands, in what looks like an inside job. But after a few months of being AWOL following a botched assignment, has 007 still got it in his locker?

The plot makes its way around various glamorous locations and women. Judi Dench’s M has more of an integral role than her usual desk jockeying and her home is still so poorly secured that Bond is able to break in undetected at will. Ralph Fiennes makes an entrance as a government bigwig with a past and we also learn a little about James’s childhood in Scotland, with Albert Finney putting in a nice cameo as a Groundskeeper Willie type. Javier Bardem is the creepily camp villain.

Twenty first-century Bond manages to be both modern and back to basics, eschewing the childish gadgetry of the invisible car era and the flippant quippery for old school set pieces. 007 is not exactly reconstructed – he still bangs his way around the globe and shows reckless disregard for the innocent passers-by who could be caught up in his derring-do – but Craig has really fleshed out this Cold War relic of a character – both literally and figuratively – and his Bond is more human than his forerunners.

Skyfall is fast, furious and fun. There is real tension in many of the action sequences – difficult for a filmmaker to produce when we know that 007 and MI6 will ultimately prevail. Of course, there is also a fair dollop of preposterousness. When M is brought before a livid ministerial committee to defend her organization’s cock-ups, she’s allowed to hold forth on the dangers of the modern enemy before launching into a lengthy Tennyson quotation. But then plausibility was never part of the Bond deal.