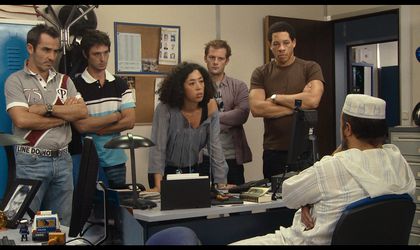 The jaded cop propping up a bar during the daytime and sadly reflecting on how his stressful career has cost him his family and his peace of mind, while saying, “Give me another one, Moe” to a sympathetic bartender, is a common sight in US police procedurals. Yes, it’s a tough ol’ job protecting and serving while keeping the scum off the streets.

Cannes prize winner Poliss transposes this familiar theme to the mean streets of Paris, following the work and play of officers from the Child Protection Unit. Director Maiwenn drew her inspiration from real cases, and the film is overwhelming in its verisimilitude – it feels like this is pretty much what you’d see if you wandered aimlessly around such a department and followed it on its operations.

The banter between the hardboiled cops rings true. Aside from Hollywood alumna Maiwenn herself (the ex-wife of Luc Besson, she acts in the film too) and rapper Joeystarr, the cast is entirely lacking a silver screen veneer. The scenes are choppy, and appear almost randomly selected and ordered. The only narrative drive is a blossoming romance between Maiwenn and Joeystarr’s characters, but this is by no means the focus and heart of the film.

It is the wider group dynamics, the personal lives of the officers – often tainted by the disturbing nature of their work – and their interaction with the perpetrators and victims of child abuse that concern the filmmaker. The latter, above all, is immensely powerful. With both the delicate interviews with young children describing where they’ve been touched and the dramatic raids where the team storms in and removes vulnerable youngsters from dangerous parents, the bare-bones realism sharpens the effect.

With their days spent wading through a swamp of the most disgusting human behavior, it’s little wonder that the officers’ relationships suffer and that their black humor often descends into inappropriate territory – which provides a few uncomfortable moments of what passes for comic relief.

Thanks to this dark subject matter, Poliss is not easy viewing. It’s not easy listening either – the bitty and haphazard nature of the scenes often makes it difficult to follow what’s going on, leaving some of the plot strands and characters feeling underdeveloped. An incongruously artificial ending then strikes a strange note after all the naturalism.

But whatever its flaws and confusion, Poliss’s believable performances from a strong cast, its persuasive moral message and a noble desire to present the truth and avoid pandering to audience expectations explain its Cannes kudos.