Expat Eye – Colectiv comment: can a safer capital be the legacy? 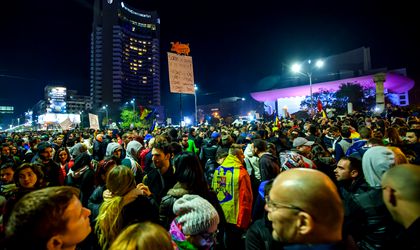 In the latest of Business Review’s series of articles considering events in Bucharest and Romania from an outsider’s perspective, Expat Eye reflects on last month’s devastating fire at the Colectiv nightclub, and wonders if improvements to the city’s social scene and culture could become a fitting tribute to the victims.

While the world prays for Paris, Romania is still grieving for those lost at Colectiv. Aside from new horror at the terrorist atrocity in France, the fresh reports of music fans dying at a concert are a poignant reminder of Bucharest’s own tragedy. It may no longer be prominent in the international media, but at home the catastrophe still plays out, in homes and hospitals.

It’s now some three weeks since the horrendous fire at the Goodbye to Gravity album launch, and the death toll has continued to rise ever since. Heart-breaking stories keep emerging. A young man who died on his 19th birthday. A cleaner – mother to five children – who took on an extra shift for RON 100 and never made it home. A victim being transported to a facility in Switzerland – and the hope of better treatment – going into cardiac arrest en route, the plane returning to Romania. Victims successfully making it to the UK – only to die a day or two afterwards. A singer waking up to the loss of all four of his band mates and his girlfriend.

The senseless suffering of the Colectiv blaze is endlessly shocking and sad, with the drip-drip of further deaths adding to the anguish. And yet the shock should perhaps not be that such a catastrophe happened last month, but that it didn’t happen before.

Most young expats coming to Romania from Western countries – used to stricter health and safety regimes governing public spaces – have been surprised upon arrival at the obvious dangers posed by the venues that host the capital’s vibrant nightlife.

Nightclubs crammed with revelers, crumbling old town buildings in an earthquake zone, basement dive bars accessible via one narrow entrance and staircase, the lack of emergency exits and fire extinguishers, the prevalence of smoking – it all adds up to an accident waiting to happen.

At first you feel slightly uneasy. You might even joke over the music to a friend, “I hope there isn’t a fire in here…” But like many of the small, everyday infractions of Romania – parking badly here, paying a backhander or avoiding a bit of tax there – it is soon normalized. You stay at the club that night, and everything is fine. You go again; it’s still fine. The fears fade and the conditions become routine. You no longer see the danger.

For all the overcrowded bars and lack of exits and extinguishers, there is not going to be a fire. Until, one day, there is.

The public’s desire for justice was passionate and painful. Once again, the people of Bucharest were marching through the capital and other cities demanding resignations and an end to corruption. This time last year, it was about electoral fraud and voters being denied their rights. Now, it was about the individuals who had allowed a public club to operate so recklessly, and bringing down the prime minister on whose watch the calamity had occurred.

While accusations of plagiarism, election rigging and being an undercover spy did not topple Victor Ponta, the Colectiv fire – described as Romania’s worst tragedy since the fall of communism – did.

Along with the PM and his government, the protests that followed the disaster – which brought tens of thousands of Romanians onto the streets – claimed Cristian Popescu Piedone, the mayor of district 4, responsible for licensing the nightclub. The owners of Colectiv were also arrested.

No punishment could be enough to atone for the near 60 young lives lost so violently, awfully and needlessly. But at the same time, the culpable officials and club owners are only accused of doing what many others have done in Bucharest (and beyond). Coming to an “arrangement” to get around the rules, doing a shoddy job to save cash – this happens every day.

In that sense, they were “unlucky” – though the word seems horribly inappropriate in the context – that in their case things turned out as they did. The days that followed the fire brought various mea culpas from other club owners, admitting to having also put lives at risk in their premises and vowing to improve or closing the venues.

They also brought a barrage of callousness and ignorance from the more reactionary reaches of society. While families and friends anxiously sought news of missing loved ones, waited at the bedsides of the injured or grieved the fallen, the superstitious and religious denouncers weighed in. The fire was a divine judgment against rockers and “Satanists” celebrating Halloween.

It is difficult to imagine how anyone could conclude that the young people who lost their lives in such dreadful circumstances – having merely gone out on a Friday night to have fun with friends and listen to music – earned their fate. The Orthodox Church received public opprobrium for the perceived lack of humanity of its response, and the “We want hospitals, not churches” slogan was revived, circulating widely on social media.

While the circumstances of the fire and its aftermath embody the worst of Romania – the corrupt, corner-cutting culture and the power of absurd dogma – the public reaction also showcased its best. As well as marching and laying flowers and candles at the scene, people queued to give blood, donated cash to families, brought coffee and snacks to donors and medical staff tending to the wounded, and provided their company’s services pro bono to help victims and relatives.

There have even been moves to finally ban smoking in bars and restaurants, limiting both fire hazard and damage to public health more generally. Amid the unrelenting horror and bleakness of this story, this step towards a safer music scene and city might be a small but fitting legacy to the victims.

While the demonstrations were initially about individuals, they also became something bigger and more symbolic: a public movement to end the corruption and shoddiness that permitted the conditions for the Colectiv fire.

Last year’s marches were for a president who promised a “Romania of things done properly”. If the things done properly now come to include health and safety provisions at public venues, the use of the correct materials to make buildings safe, a licensing system with integrity, the enforcement of rules and regulations, and, most of all, a respect for the safety of others, the Colectiv victims will have a legacy of value.