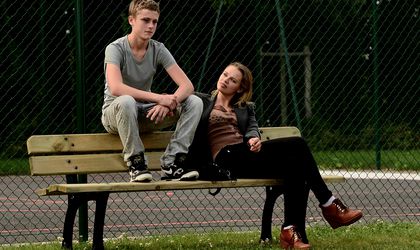 Teenager Malony is a rebel without a cause. Well, there is a historical cause: his chaotic upbringing, namely a dead father, abusive adoptive father and drug-addicted mother. At six years old, he witnesses the latter scream and swear in the opening scene at a well-meaning authority figure – juvenile court judge Florence Blaque (Catherine Deneuve) – for her suggestion of protective measures after Malony has missed months of school.

Even before the story jumps forward in time, we can surmise the impact that this kind of childhood will have on the boy: “Give me a child until he is seven and I will show you the man,” goes the Jesuit saying. Standing Tall follows the man – or at least the surly teen on the cusp of manhood – through a revolving-door French justice system, as he lands up again and again back in front of Judge Blaque.

We also see Malony (Rod Paradot) in the bosom of his dysfunctional family, and pinging between various juvenile detention centers, as a dedicated team of professionals bang their heads against the wall trying to get him back on the straight and narrow.

Director Emmanuelle Bercot’s Cannes opener takes a benevolent view of the French justice system, portraying its representatives as decent and hardworking people doing their best by Malony, despite the wayward youth’s repeated refusals to help himself. The teen, however, is still a better prospect for rehabilitation than his hopeless mother Séverine (Sara Forestier), who at one point opts to leave her younger son in state care rather than try and get him back, as her latest bloke doesn’t know she has kids.

We hope that Malony will be saved by Blaque’s compassion; the tireless efforts of Yann (Benoît Magimel), a case worker who, having put his own troubled past behind him, understands his volatile charge better than most; and his fledgling romance with Tess (Diane Rouxel), the daughter of a teacher at one of the young offenders’ institutes he passes through.

But pushing him on towards self-destruction are the weak-willed Séverine and Malory’s own seemingly uncontrollable temper.

At the heart of the film is a blistering performance from Paradot, a non-professional actor who brings an explosive rawness to the part. Both his role and the film itself are reminiscent of another French-language Cannes entrant, the 2014 Canadian drama Mommy, from Xavier Dolan, which also focused on an angry young man’s intersection with the penal system.

There is high-caliber support from Deneuve, and Magimel and Forestier are also convincing as the flawed role models in Malony’s life. Rouxel’s introverted performance suggests that Tess too has plenty of her own baggage.

Her character and the effect she has on Malony are interesting, but the love interest subplot – particularly a powerful but somewhat melodramatic hospital scene – sacrifices some of the film’s hard-won vérité (which often recalls the Dardenne brothers’ work), albeit giving the viewer a bit of cheer to sweeten the two-hour running time.

The length allows Bercot to subtly and unhurriedly depict Malony’s progress as he goes from near seven-year-old to the Jesuits’ man.