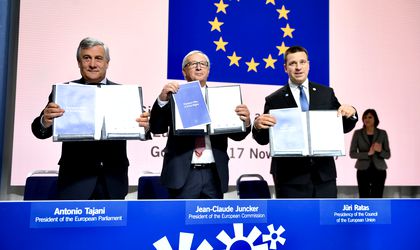 European Union leaders have proclaimed the European Pillar of Social Rights at the Social Summit for fair jobs and growth that took place in Gothenburg, Sweden, on November 17. This initiative, which was first announced by the president of the European Commission, Jean-Claude Juncker, aims to prepare European for the challenges of the future labor markets.

“We have to adapt our social system in the new world of work,” said Marianne Thyssen, the European commissioner for employment, social affairs, skills and labour mobility, during a media seminar held in Gothenburg on Thursday. She added that all EU institutions and member states will subscribe to the European Pillar of Social Rights.

The pillar sets out 20 key principles and rights to support fair and well-functioning labour markets and welfare systems, according to the EC. It is designed mainly for the euro area but can be applied across the Union. In terms of wages, the document states that “workers have the right to fair wages that provide for a decent standard of living”, while on healthcare it states that “everyone has the right to timely access to affordable, preventive and curative health care of good quality.” “We are not proposing wage regulations in the social pillars,” said Valdis Dombrovskis, vice president for the euro and social dialogue, financial stability, financial services and capital markets union. He added that the social pillar in itself is not a source of law. This means that the pillar provides only recommendations to member states on improving their social policies.

The EC states that labor market is influenced by globalization, the digital revolution, changing work patterns and demographic developments. Moreover, 70 million Europeans lack basic literacy, numeracy and digital skills, while 40 percent of employers say they can’t find people with the right skills to grow and innovate.

“In times of deep change – whether in life or in politics – it is only natural to come back to what defines you and to what holds you together. Therefore, I am glad that we could all agree on the European Pillar of Social Rights in less than half a year since the European Commission proposed it. This shared commitment is a strong demonstration of European unity,” said Juncker following the approval of the principles.

More than 8 in 10 Europeans feel that the free-market economy should go hand in hand with a high level of social protection, according to the findings of an EU barometer published earlier this week. The respondents have mentioned unemployment and social inequalities as the main challenges for the EU, alongside migration issues.

The survey further shows that reaching comparable living standards is seen as essential for the future of Europe according to more than half of the respondents.

Romania’s position in the Social Scoreboard 2017

In terms of early leavers from education and training, income inequality, living conditions and digital access, Romania is lagging behind most of the member states.

In 2016, Romania reported 18.5 percent of early leavers from education and training (out of the population aged 18-24), this being the third biggest score in the EU, behind Spain and Malta.

Looking at people at risk of poverty or social exclusion, Romania’s score actually worsened in 2016, with 38.8 percent of the population facing such risks. This share reached 40.4 percent in Bulgaria.

The scoreboard also mentions the issue of young people neither in employment nor in education and training (NEET). This rate stood at 17.4 percent in Romania last year – the third biggest score in the EU. The data takes into account people aged 15-24.

NEET rate in Romania at 17.4 percent

The document show that Romania’s unemployment rate is below that the in the euro zone, but the country is not doing enough to deploy labor market policies for people who want to work.

In terms of labor costs, the compensation of employees per hour worked in Romania stood at EUR 4.9 in 2016. This was the second lowest cost, just behind Bulgaria. The highest compensation rates were recorded in Luxembourg, Denmark and Belgium with EUR 43.3, EUR 38.9 and EUR 37.8, respectively.

Only 28 percent of Romanians have basic digital skills