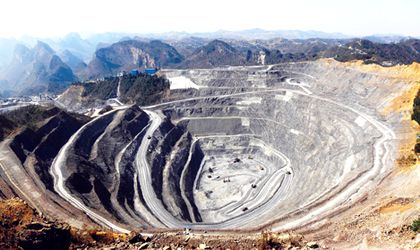 The Eldorado Gold Corporation, a Canadian gold producer seeking to open an open pit mine in Certej, Apuseni Mountains, announced its plans to invest some USD 20 million locally this year. The money will go into “continuing infrastructure projects, advancing permitting and support engineering as defined in the 2015 Feasibility Study”.

The company has spent some USD 15.8 million last year in Romania, “mainly on geotechnical and metallurgical testing, site preparation and engineering studies”. In total, Eldorado announces, it has spent USD 30 million on exploration activities, which were conducted at 17 projects including early-stage, brownfields and in-mine programs in Turkey, China, Brazil, Greece and Romania and included 58,000 meters of drilling.

“In Romania, five exploration projects were drilled in the Certej area. A total of 5,100 meters of drilling were completed at the Muncel VMS deposit aimed at identifying gold-rich areas within the base metal system. At Magura, 8,900 meters of drilling targeted down-dip and along-strike extensions of high-grade veins that were historically explored in underground workings. At the newly acquired Certej North exploration license, 4,700 meters of drilling were completed intersecting broad zones of peripheral porphyry and epithermal-style alteration/mineralization. Drilling programs also tested the P. Avram prospect (1,700 meters) and porphyry targets on the Deva exploration license (650 meters),” a company statement reads.

Eldorado Gold is a Canadian low-cost gold producer with over 20 years of experience building and operating gold mines in Europe, Asia and South America. It currently has operating mines in Greece, Turkey and China, while the mine in Certej is still in the evaluation and development stage.

“The Certej mining project, with a 16 year duration and a processing capacity of 3 million tonnes of ore/year, involves deforestation, soil uncovering, an open pit, two huge waste dumps and the use of cyanides to obtain gold, as well as building two tailings dams over 63.6 ha,” according to a Mining Watch study, which draws attention on the high risks of such dams.

The Certej deposit is owned by Deva Gold, a joint venture between Eldorado Gold (80.5 percent) and state-owned Minvest Deva (19.5 percent).