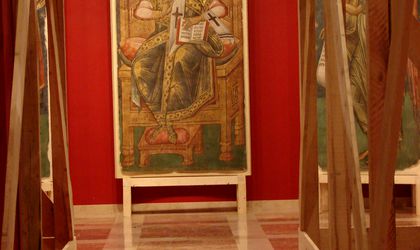 The Arges Monastery, a flagship example of Romanian culture, was restored between 1875 and 1882 under the supervision of architect André Lecomte du Noüy, a practitioner of French conservationist principles.

The original mural had to make room for an entirely new one, and only 35 fragments were considered worth preserving. Some 31 of them were restored between 1990 and 2012 and are now on show together for the first time. These feature votive paintings, several historical figures, a number of saints (primarily military), and a large Deesis scene, forming a substantial body of work that bears witness to the quality of murals in Wallachia in the 16th century and the complex political and cultural message articulated by its rulers.

According to historical documents, Voivode Neagoe Basarab (reign: 1512-1521) started working on the Arges monastery soon after he was crowned. The church was designed to be a family funerary chapel and also a statement of his dynastic and personal ambitions. Along with Basarab’s writings, the construction of the church placed him in the lineage of great Byzantine emperors as much as in that of contemporary Renaissance rulers with scholarly preoccupations.

Among the other fragments rescued in the late 19th century, martyrs and military saints take pride of place, enforcing a message in which piety and active militancy blended, mirroring the people’s concerns at a time when splits in Christian belief were deepening and the threat of the Ottoman Empire had become overwhelming. The widespread belief that no great foundation can be accomplished without a major sacrifice found its embodiment in the Arges monastery which, along with its master mason Manole, became the iconic image at the heart of one of the most popular Romanian legends.

The scenography of the exhibition incorporates multimedia elements such as a film explaining the restoration process of the frescos, a 3D virtual reconstruction of the positions occupied by the fresco fragments in the monumental ensemble before their removal, and a touchscreen allowing access to drawings and sketches by painter Gheorghe Tattarescu at the Arges monastery in 1860, before the restoration of the monument.

The legend of the Arges monastery

Negru Voda, known in Romanian history as Neagoe Basarab, wanted to build the most beautiful monastery in the country so he hired Manole, the best mason of the day. The walls of the monastery were always crumbling and Manole needed to find a solution on pain of death. He had a dream in which he was told, in order to build the most beautiful monastery, he had to wall in someone very dear to him or to his masons. To finish the construction, they agreed that the first wife who came there the following morning should be the victim. Manole`s wife, Ana, was first and accepted the proposal, considering it a game. Thus the beautiful monastery was built. When Manole and his masons told the prince that they could always build an even greater building, Negru Voda had them stranded on the roof so that they could not build anything similar. A spring of clear water, named after Manole, marks the spot where he is said to have fallen.

Exhibition held by the National Museum of Art of Romania, until May 26.