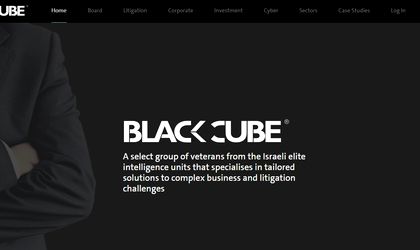 Alexander Adamescu, the son of jailed businessman and media mogul Dan Adamescu, rejected local media reports according to which his father had inked a contract with private Israeli intelligence consultancy Black Cube so as to spy on the head of Romania’s anti-graft head, Laura Codruta Kovesi.

News portal HotNews.ro published a contract in which Dan Adamescu appears as a “client” of Black Cube. In a separate contract, the client is Daniel Dragomir, a former officer of the domestic intelligence service SRI.

“There was no need and still there is no need to hire an investigation firm such as Black Cube to present the political motivation, the breach of human rights and the flagrant groundlessness of the prosecution and conviction of Dan Adamescu, which is continuing at this moment with my extradition process,” said Alexander Adamescu in a statement. He added that his father was made guilty from day one and was arrested because he is an influential businessman.

The son of the businessman added that The Nova Group, which is controlled by Adamescu’s family, has sued Romania at the International Court of Arbitration in Washington, citing the “forced bankruptcy” for Astra Asigurari.

Two employees of Black Cube were arrested in Romania this April. The two men infiltrated the close circle of Kovesi, including her relatives, to find confidential information about her. Some of the e-mails of people Kovesi knew have been breached.

The former intelligence officer Dragomir was placed in preventive arrest last month. He is accused of setting up a criminal group and of several IT-related crimes, including the illegal breach of data. Dragomir is already on trial in a separate case, involving the use of influence in exchange for money.

Dan Adamescu was sentenced to four years and four months in jail this May. He was accused of bribing judges that were handling insolvency cases involving his companies.