Culture goes public during B-FIT in the Street festival 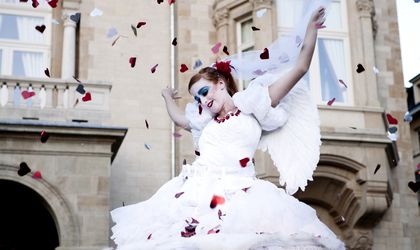 
This autumn, theater festivals will entertain the capital’s citizens with shows on improvised stages and in unconventional spaces as part of the Bucharest City Days celebration. From September 13-16, 20 theater companies from seven different countries will participate in the B-FIT in the Street International Street Theater Festival. BR took a look at the program and details some of the highlights.

The colorful universe of street theater will play with concepts of space, rhythm and reception over four days dedicated to the capital’s art lovers. Performances will be staged in several locations throughout Bucharest: Constitutiei Square, Universitatii Square, Unirii Square, George Enescu Square, ColteaPark and the Old City Center.

LA FURA DELS BAUS, one of the legends of street theater, whose over 30 years of experience has earned them more than 50 awards, will present on Sunday, September 16 in Constitutiei Square The Hidden City/The Giant and the Angel, a show inspired by the architecture and spirit of Bucharest. Pyrotechnic effects and aerial acrobatics will complete the La Fura dels Baus performance.

Meanwhile, the famous DAVID MORENO and his Floten Tecles show will see the artists lift his music up to the sky and become a star. Moreno will sing and play both the piano and percussion, all while floating six meters above the stage. The lid of his grand piano will become a cinema screen, showing a thirty-minute film.

Romania will be represented by the acrobatic team XTREME PROJECT with two shows, Vertical Tower and Samba Schools Parade, which will take place on Saturday, September 15 and Sunday, September 16, from 20.30, from Unirii Square to Constitutiei Square.

The entire BFIT in the Street program can be seen below :