Concerted effort: beat the winter blues with some live music 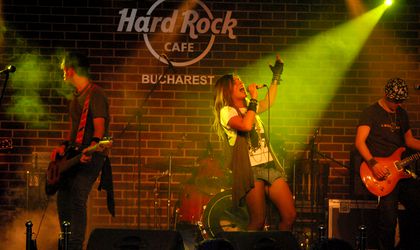 There’s nothing quite like live music, and concert lovers will find plenty of choice in Bucharest. From club music to cabaret, folk to flamenco, BR brings you a selection of the best live music venues in the capital.

Famous bands from the Rolling Stones and the Beatles through to Oasis cut their teeth in pubs and bars before they hit the big scene. Locally, many aspiring musicians stage great shows, which can be enjoyed for a small or no admission fee at various live music bars. You may also catch a famous singer, as contestants from television music competitions, such as X Factor and The Voice of Romania, also ply the circuit.

The world famous restaurant chain (in picture), whose walls are plastered with rock and roll memorabilia, entertains diners with both famous bands and wannabes. Neck a Hurricane – the most famous HRC cocktail, a blend of orange, mango and pineapple juice, infused with Havana Club Anejo Blanco Rum, Captain Morgan Black Rum, Amaretto and Grenadine and garnished with an orange and maraschino cherry – and rock out. For vodka lovers, the HRC’s second top drink is Tropical Rock, a cocktail of Absolut Raspberry Vodka, banana crème, piña colada mix and Midori Melon Liqueur float and garnished with a maraschino cherry. Concert ticket prices go from RON 25-60.

This British-themed joint has been making waves on the Bucharest social scene since opening a few years back. Split between three levels, there’s the roomy cellar, which hosts live rock, jazz, blues and folk bands and stand-up comedy, a bar on the ground floor and an upstairs karaoke lounge, open nightly, where even the most feeble attempts to sing are warmly applauded by the friendly crowd. In its short lifespan MoJo has established itself as something of an institution, thanks to the jolly atmosphere and events.

The newest club in the Old Town, Mantrap promises live music twice a week, stand-up comedy and sound and light spots by DJs. Decorated with a sports theme and designed like a fire extinguisher, the pub serves a variety of draft beers, including black or unfiltered beer. Customers can also enjoy a premiere, the Vodka Firestarter, a Moldavian specialty.

One of the best live music venues in Bucharest, Music Club is host to two great resident bands, Cortez and Publika, which perform enjoyable covers of classic hits most evenings. Fridays and Saturdays see live concerts, and a drink is included in the ticket price of RON 15.

Just at the entrance to the Old Town, a venue well worthy of your leisure time invites guests to its living room. On nights with no live band, you will find karaoke, themed events or parties.

Green Hours provides a quality program of jazz concerts, alternative theater (the venue has its very own theater, Teatrul Luni / Monday Theater) and all sorts of cultural events (from art exhibitions to handmade accessories fairs). The club is popular with culture lovers from 18-80, and is definitely a place you should visit at least once. Note that it has moved from its long-term Calea Victoriei location.

A bite of traditional Romanian folklore

For a literal taste of Romania, try a traditional folk party. Some restaurants offer a complete menu with live band, old-school dances and, of course, Romanian dishes.

A short introduction to traditional Romanian dancing: the moves vary from simple village styles, usually based on walking steps, to very complex dances with fast, intricate steps. They are carried out in short lines, open circles or closed circles. Traditionally men and women often danced in separate lines, or in separate parts of a long line.

Any traditional dance is a combination of formation, regional style, motifs, musical rhythm, choreography and the social occasion. A change in one or more of these elements can give another dance, sometimes too subtle for a visitor to recognize. As newer dance formations become fashionable these combined with the existing music and dance repertoire to give new local versions.

Some of the dances are fast and energetic with multiple steps. Line dance steps are traditionally called by the leader, or changed at the leader’s whim, with the rest of the dancers picking up the step as quickly as possible when the leader changes the motion.

Be prepared for the full range of Romanian dishes served in the oldest beerhouse in the city. Opened in 1879, this historical landmark is one of the few venues in Bucharest preserved as such, with architecture that reminds visitors why Bucharest was once dubbed the “little Paris”. Distinctive elements include the murals, stained glass and carved cross-beams. Along with the beer, made to a secret original recipe, The Beer Cart (as the venue name translates) is also famous for its atmosphere. On Mondays, Valentin Albesteanu gives a wonderful violin concert at noon, followed by Taraful Radu Simion in the evening. On Tuesdays, Anima Quartet joins you for lunch, while the party continues in the late afternoon with folk dances, music, social dances and flamenco. On Wednesdays, diners can enjoy a midday strings concert, followed by folk dances, traditional music, and social and Spanish dances in the evening. On Thursdays, Caru’ cu Bere hosts a violin concert at noon, carrying on with folk dances, time-honored music, social dances and tangos from 19.00. At weekends, the restaurant presents lunchtime violin concerts, while in the evening traditional music, social dances, tangos and Spanish dances maintain the joyful atmosphere.

As well as serving some of the best Romanian food in town, with well-balanced traditional dishes such as an excellent trout soup and the fried organic chicken with garlic sauce, the restaurant is also one of the city’s historical landmarks. A generous garden with old trees surrounds a two-storey villa, classified as an architectural monument, built in 1892 in the Romanian neo-classical style. Bands stage different live concerts, from jazz sessions to traditional Romanian music.

This place’s atmosphere, created by the décor and the live music program, recalls the Bucharest of the 1930s’ “joie de vivre”. The impeccable service is another plus at this themed restaurant. Along with traditional food and an impressive wine list, the restaurant stages a wide variety of entertainment: concerts by Romanian sopranos, balls that recall the Inter-War period of Bucharest, violin concerts, chansonettes, cabaret shows, cimbalom concerts as well as gypsy music interpreted by the Taraful Cailor de Curte Veche.