Ciolos, the first Romanian PM to visit the Netherlands in 10 years 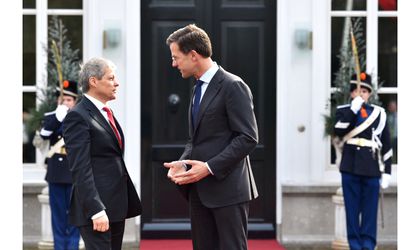 Dacian Ciolos went on an official working visit in Hague, on Wednesday, this being the first visit of a Romanian PM in the Netherlands in the past 10 years.

Ciolos has met with his Dutch counterpart Mark Rutte, and also with representatives of the Parliament and with the community of Romanians living in this country.

The PM had on his agenda the topic of Schengen. Romania has been trying for years to join the Schengen area, but there wasn’t any political consensus at a European level for this move.

The Netherlands has been one of the EU states that has constantly opposed Romania’s accession in the border-free area.

“Romania is ready to join Schengen and this kind of dialogue is extremely important to present the realities of our country”, said Ciolos, during his meeting with Rutte.

Ciolos added that Romania support the creation of an EU agency for coastal and border protection, and that our country could partly host the HQ for this newly proposed organization.

During his talks with Dutch officials, Ciolos has suggested that Romania is capable of securing the independence of the judiciary and the ongoing effort to combat corruption.

Thus he stated the European Commission, the executive arm of the EU, could scrap Romania’s motorization under the Cooperation and Verification Mechanism. The EU has been issuing annual reports on the Romanian judiciary under the CVM since 2007, when Romania joined the EU.

The PM has outlined the government’s plans to enhance the economic relations with the Netherlands, which currently holds the rotating presidency of the EU Council.