Bucharest under the wand of International Festival of Radio Ensembles “RadiRo” 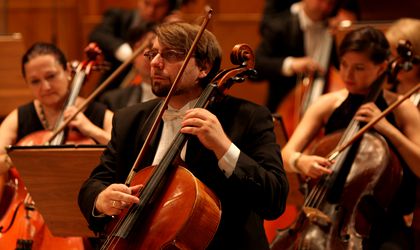 The first edition of the International Festival of Radio Ensembles “RadiRo” is on for classical music lovers between September 23 and 29 with performances from Orchestre Philharmonique de Radio France, Symphonic Orchestra Nazionale della Rai (OSN Rai), BBC Symphony Orchestra and the National Radio Orchestra.

The Orchestre Philharmonique de Radio France was founded in 1976 to provide Radio France, the country’s top music producer, with an ensemble capable of performing a wide variety of music. This group of musicians can be split into two or three groups – from symphony orchestra size to smaller chamber ensemble. Each year the orchestra offers 50 concerts in France and abroad.

In its 27 years of existence, the Orchestre Philharmonique de Radio France has been led by such noted conductors as Kirill Kondrachine, Ferdinand Leitner, Charles Mackerras , Yuri Temirkanov, Giuseppe Sinopoli, John Eliot Gardiner, Roger Norrington and Michael Tilson Thomas. Emmanuel Krivine was the orchestra’s first guest conductor from 1981-1983. Marek Janowski was the Music Director from 1989-1999. Since 2000, the orchestra has been led by Myung-Whun Chung, their new Music Director.

For the International Festival of Radio Ensembles “RadiRo”, The Orchestre Philharmonique de Radio France will perform with the violinist Jian Wang on Wednesday, September 26, at Sala Mare a Palatului, starting hour 19.30.

The history of the Orchestra Sinfonica Nazionale della Rai goes back to 1931 when the new public radio authority founded its first symphony orchestra in Torino, later joined by orchestras in Roma, Milano and Napoli. Over the years, the various orchestras have been directed by all the major conductors of the day, from Vittorio Gui to Wilhelm Furtwängler, Herbert von Karajan, Antonio Guarnieri, Igor Stravinskij, Leopold Stokowski, Sergiu Celibidache, Carlo Maria Giulini, Mario Rossi, Lorin Maazel, Thomas Schippers, Zubin Mehta and Wolfgang Sawallisch. Claudio Abbado, Riccardo Chailly, Riccardo Muti and Giuseppe Sinopoli have all made important debuts with the four orchestras.

In 1994 the four orchestras were merged in Torino. The new Orchestra Sinfonica Nazionale della Rai (OSN Rai) made its official debut with Georges Prêtre and Giuseppe Sinopoli. Since then, the original members have been joined by some of the best young instrumentalists. Juraj Valčuha has been its Principal Conductor since November 2009.

In the festival’s week, OSN RAI will perform on September 24 and September 25, on the stage of Sala Mare a Palatului, starting hour 19.30. On the first performance, Romanian violinist Alexandru Tomescu will join the OSN RAI orchestra, while in the second night of their show the great pianist Christian Zacharias will be on stage with them.

The third great orchestra invited to the festival is BBC Symphony Orchestra, which has played a central role at the heart of British musical life since its inception in 1930. It provides the backbone of the BBC Proms with around a dozen concerts each year, including the First and Last Nights, and is Associate Orchestra of the Barbican.

The BBC Symphony Orchestra can be seen on Friday, September 28 and Saturday, September 29, with special participation of violinist Viviane Hagner, for Friday’s concert and Romanian pianist Dan Grigore in the second day.

Last but not least, the central orchestra of the International Festival of Radio Ensembles “RadiRo” is the National Radio Orchestra, the oldest orchestra from those invited.

The profile, repertoire and history of the National Radio Orchestra have for more than a century been defined by the national culture, at the level of the creation, performance and broadcast of music in Romania. At the same time as the establishment of the Romanian Radio Broadcasting Company in 1928, the Radio Symphonic Orchestra was founded at the initiative and under the directorship of composer Mihail Jora, and began to give public concerts in 1932.

Situated at the same level as the major international radio orchestras, the work of the Romanian National Radio Orchestra has been honoured correspondingly with a number of prestigious national and international prizes for its recordings, including the Charles Cros (France), Puerta del Sol (Uruguay), and Koussevitzky (USA).

Recently, the National Radio Orchestra has enhanced its renown thanks to its concert tours of France, Italy, Germany, Spain, Switzerland, Russia, Hungary, Turkey, Bulgaria, Cyprus, Greece, Japan, and China, as well as its participation at prestigious international festivals. Romanian and international music critics have underlined the value of this outstanding ensemble within the framework of contemporary concert-going life, a value which is comparable to that of the world’s oldest radio broadcast orchestras. The National Radio Orchestra has a unique profile in dialogue with Romanian audiences, musicians and symphonic ensembles.

The first edition of the International Festival of Radio Ensembles “RadiRo” present the National Radio Orchestra on the opening concert, on September 23, together with The Radio Academic Choir, starting hour 19.30, at Sala Mare a Palatului. The conductor of this orchestra is Christian Zacharias. The orchestra will also go on stage on September 27, this time under the wand of Horia Andreescu.

The tickets can be purchased from Eventim network, prices between RON 25 and RON 150.

Program of the festival: