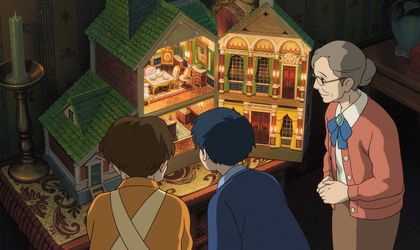 Those who have the courage to leave their modesty and propriety at the door of the seventh edition of the Anim’est festival are in for an evening of surprises. The Night of the Animated Bad Taste is a road show created by HAFF (the Holland Animation Film Festival), powered by the Dutch film critic Jan Doense.

The eclectic collection encompasses all techniques and styles, including hand drawn, puppet and computer animation, and invites the viewer to wonder what bad taste really means.

The event includes the Anim’est Grand Trophy for which 45 international films will compete. The festival also has two special sections for Romanian and Balkan films, which will see 35 short films in contention.

Romanian animation is represented in this year’s contest with 21 titles. Two of the animators who competed last year in this section are returning – Andra Berila, with Cloudman and Torok Tihamer with Playground. Codrin Iftodi, editor of Outrageously Disco, has entered Mobilfonul / The Mobile Phone, while The Little Dark by Victor Ionescu is included in both sections.

One of the stars of the event is Oh Willy…, a Belgian animated film by Emma de Swaef and Marc James Roels, which comes to Anim’est after competing at a prestigious festival in Clermont Ferrand and having been nominated for the Cartoon d’Or, the most important European award for animated short films. Another Cartoon d’Or finalist is Edmond était un âne/Edmond Was a Donkey, directed by Franck Dion, the story of a quiet man who begins to discover how different he is. From the Annecy Festival competition, the largest of its kind in Europe, comes Father, a Bulgarian-Croatian-German co-production by Ivan Bogdanov, Moritz Mayerhofer, Asparuh Petrov, Veljko Popovic, Rositsa Raleva and Dmitry Yagodina, which explores the things left unsaid between fathers and children.

The event is organized with the support of the Netherlands Embassy in Romania. Tickets can be bought from the TicketFan network.

The entire program of the event can be found here.