Bucharest municipality has EUR 2.3 bln in EU money allotted through to 2020 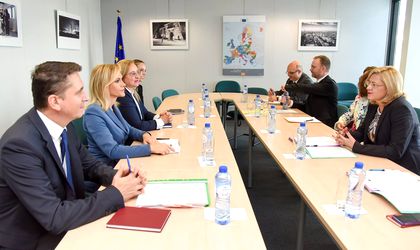 The European commissioner for regional policy, Corina Cretu, says that the Bucharest municipality has billions of euros at its disposal for major infrastructure investments in the Romanian Capital.

The mayor of Bucharest Gabriela Firea has travelled to Brussels and talked with Cretu about the projects that will be developed with the help of EU money.

“I made a recommendation to the general mayor of (Bucharest – e.n.) to develop a plan for the implementation of projects with EU financing, with deadlines and a clear distribution of responsibilities and to start as soon as possible the preparation of projects for the period 2014-2020,” said Cretu, according to a statement.

According to Cretu, Bucharest has EUR 2.3 billion of EU money that it can use in the 2014-2020 programming period,  which is roughly more than 10 percent of the European Fund for Regional Development and the Cohesion Fund funds allotted for Romania.

The commissioner said it would support Firea on the development of large scale projects such as the fifth subway line linking Drumul Taberei zone to Eroilor area in Bucharest and the sixth subway line to Airport Otopeni, where the construction works haven’t started yet.

The municipality is seeking EU funding for additional projects such as the district heating system, the bypass road of Bucharest and a new waste water treatment plant.

Cretu added that some of the projects recorded delays under the 2017-2013 funding period and thhat Firea told her this wouldn’t happen under her watch.