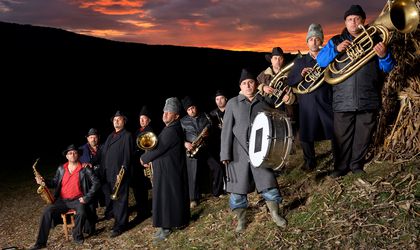 Now on its fifth run, Balkanik Festival  consists of three days and three nights of lively concerts and arts and crafts workshops. Uranus Garden is a hidden courtyard in the heart of Bucharest, surrounded by surreal architecture from the 19th century which survived the communist town planning of the 1980s.

On this edition, it will be presented a musical project, Doina Revival, created around the improvised nature of the Romanian ”doina” and it brings together artists from Romania, Spain and Iran who call themselves Roots Revival, a band created by Mehdi Aminian (Iran). Maria Casandra Hauși – vocals (Romania), Mehdi Aminian (vocals, ney, setar), , Marti Hosta – percussion (Spain), Iosua Galev – piano (Romania), Zabih Vahid – kamancheh (Iran) w. guests are part of the project.

Musical genres will include electro-gypsy swingcore, gypsy fusion, brass music and Balkan-psychedelic, and the event attracts everyone from jazz lovers, ravers, globe trotters and couchsurfers to families with kids.

The Ark location will host the after-parties, moving from the beautiful garden to the historical building. Friday, September 11, the after-party starts at The Ark with Kottarashky & The Rain Dogs (Bulgaria). Nikola Gruev’s band recorded eleven fresh tracks that take us into a whole new universe of advanced Balkan Funk and Blues. The compositions still carry the unique Kottarashky sound from the field recordings and his authentic samples. The party continues with Dj Click, an adventuresome alchemist who infuses rural with urban and extracts living music from electronic mechanics. His no visa music was released on prestigious compilations. His worldtronica touch has paved the way for a truly international league of cultural diversification.

The sounds of the Middle East are coming to The Ark, Saturday, September 12, with a live set from Cumbus Cemaat (Istanbul). Their music was born on the banks of the Bosfor river from songs gathered around the Balkans and the Middle East. For the last couple of years they’ve been frequent guests at World music bar Araf in Instanbul, quickly gaining popularity especially in Taksim.