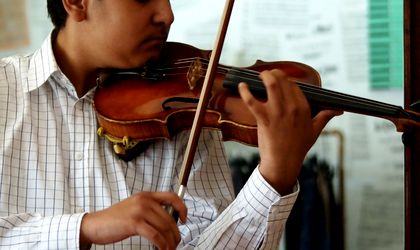 To discover stories of life and art in the capital, try the Art in Bucharest tour. This unusual offering captures the essence of Romania in downtown Bucharest, affording participants an insight into artists’ works and studios.

Mircea and Simona Crisbasanu invite art lovers on guided tours that will take them to the workshops of Romanian painters, sculptors, craftspeople, theater and film artists.

“The studio of the artist shows a unique world built within creation. Each studio is different from another, and when you have the chance of visiting several of them in the same day, you must consider yourself privileged,” wrote Mircea after the first tour, which took place in January 2012.

Having taken the Art in Bucharest tour twice, I discovered that each studio reveals a completely different world. The first surprise came when I found that I would never have guessed at a first glance what an old and somewhat unappealing building hides inside.

Only 10 minutes’ walk from Unirii Square was hidden a wonderful gem of the Bucharest art scene, where we found out how three painters work together in a space provided by a family of art lovers. There, Zoita Delia Calinescu, Anca Iriunciuc and Ramon Sadic create most of their paintings in contemporary style. Dumitrescu revealed to us the major work of art from an exhibition that will take place soon. We then moved to Merci Charity Boutique, where Mircea Dumitrescu (in picture), a young violinist, played Fritz Kreisler, William Kroll, Antonio Vivaldi and Niccolò Paganini for us.

“Someday, I will play the Stradivarius violin,” said the violinist, transmitting to us the passion he has for this musical instrument.

On my second tour, I discovered the tremendous world of Alexandru Ciutureanu, a sculptor who sadly passed away in March, who has been compared with the great Constantin Brancusi. We saw some pieces of art considered flawed by the artist, as well as some of his first attempts at sculpture and unfinished exhibits. We then moved to Ana Wagner’s studio, where we felt like Alice in Wonderland, surrounded by great pieces of porcelain, from pots and kettles to jewelry and lamps. The final stop was at a contemporary jewelry master, David Sandu, who explained to us in detail the art of making jewelry, the processes and the school he is currently running for those interested in jewelry design.