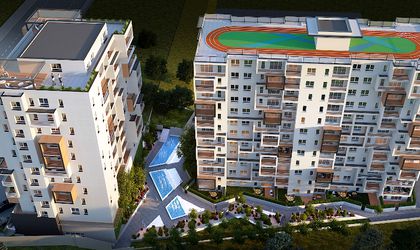 Thus, Forty Management has the last three projects developed internationally awarded in the category of real estate development, together with the two already listed, being also Central District Cuza99 awarded in 2017, residential project of which 43 apartments were sold in just three weeks from the beginning of sales. .

The company launched in Romania the affordable luxury strategy, which means an excellent price-quality ratio, and for the Central District 4 Elements project, for example, at a construction quality similar to that of the premium projects, the sale price is only EUR 1,250 per sqm, given that the average trading price in Bucharest for new apartments is EUR 1,400 per sqm.

“We try every project we develop to offer, together with decent prices and a high quality of housing, which will position us among the top European developers. Following the tradition of national premieres from previous projects – where in Central District Cuza 99 we created a green building of our own, with trees of 16 m high and magnificent gardeners on the facade, and in Central District 4 Elements we will implement for the first time in a real estate project residential a running track on the block and a relaxation area with outdoor cinema – and in the Central District of the Future 134 we will offer the first residential project with direct access to a tennis, basketball and football field, at night, exclusively for the residents. In this phase, off-plan sales, we sold 40 percent of the apartments and rented the entire office area. In an optimistic scenario, at the end of this year we will start to build. We are glad that this development direction is internationally validated through the prizes won by these projects”, says Lucian Azoitei, CEO Forty Management.