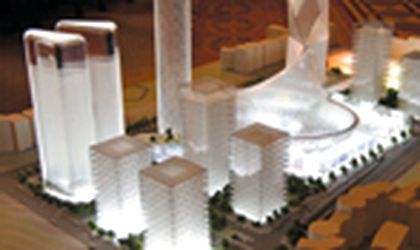 Developer TriGranit has shown patience for the last five years since it first got itself involved in the Esplanada project. In March this year, its patience seemed to be paying off, when TriGranit representatives announced the contract was being analyzed by the Romanian Ministry of Justice and Ministry of Finance, and were hoping it would be signed within several weeks. Half a year later, the ministries are yet to give their OK to the contract, which is only one of the problems it continues to stumble upon.
In their turn, the two institutions need to solve two other issues. On one hand, the temporary property rights to the project, which should help the developer get bank loans against the property, and the restitution claims over half of the plot destined for Esplanada, according to Laszlo Borbely, minister of development, public works and housing.
“I don't know what can be done until the elections in fall, as everybody is preparing their political campaigns, but I hope these two problems, which are not that big, will be finally solved,” said Borbely.
The property restitution problem might not be the biggest impediment in starting the project, and, as the minister has suggested, if and when the contract is signed, the developer could start works on the piece of land available at the time. Solving the restitution claims over the other half of the plot could keep the municipality busy for another two and a half years. But TriGranit was expecting delays. Earlier this year, the developer's representatives said they weren't expecting to see the start of construction works in less than two years.
Borbely optimistically estimated that in two or three weeks the final details, currently in the hands of the Finance and Justice ministries, should also be solved. The government should then approve the emergency ordinance for the transfer of ownership to the Bucharest city hall.
A new issue came to light however once the new mayor, Sorin Oprescu, started his mandate at the helm of the Bucharest city hall. He said the 10-hectare plot in downtown Bucharest that for the last couple of years was poised to become the mixed Esplanada project, would be better off as a park.
TriGranit representatives however underlined the fact that the project features green areas on 25 percent of its surface and follows the rules of green and ecological developments. In his turn, the new chief architect of Bucharest, Gheorghe Patrascu, said the green areas included in the planned project could be enough to cover the demands of the general urban plan.
But in the end the mayor said it was up to him. “Everybody has the right to their technical opinion. However, the final decision in the Esplanada case is in the hands of the general mayor and the city council – but only after consulting the Bucharest inhabitants,” said Oprescu last week.
Prior to Oprescu's statement, TriGranit representatives and representatives of several institutions involved in the project debated it at a roundtable. The event came after a period when TriGranit did not comment on the Esplanada project, as it awaited an outcome.
Last week, the company broke the silence. “The negotiations were tough. We have lost months in a row while the new and changing ministries got to know the project. It is awkward for the city hall to be part of these negotiations from the beginning and agree with the project, then, under another head, take their toys and leave. Serious people are unable to understand this, and it doesn't happen anywhere else in the world,” said Dan Ghibernea, country manager of TriGranit Development Romania. The public-private partnership problems are due to the lack of proper legislation, said Laszlo Borbely. “The contract was negotiated based on an ordinance which is no longer in force and which was not replaced. […] In 18 years, we haven't been able to come up with coherent PPP legislation,” said Borbely.
The Esplanada project, estimated to cost around EUR 1 billion, should in a first stage include 12,000 sqm of offices, a cultural center worth some EUR 40 million and parking places which will go as benefits to the public authority partner in the project. All in all, the first phase should feature 355,000 sqm, out of the planned 800,000 sqm in total.
TriGranit Development Corporation, with projects in 11 European countries, is owned by investment fund Immoeast, Hungarian businessmen Sandor Demjan, Sandor Csanyi, Canadian businessmen Peter Munk, and Nathaniel Rothschild.