THE TALLEST BUILDING IN ROMANIA UNDER CONSTRUCTION IN TIMIŞOARA. FIND OUT WHAT IT WILL INCLUDE AND WHEN IT WILL BE COMPLETED! 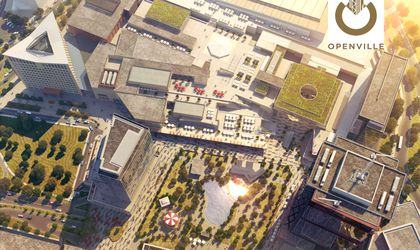 The tallest office building in Romania will accommodate an impressive amount of office premises (52,000 sqm), as well as event halls, cafés, restaurants and stores. This commercial area is one of the most coveted by tenants in the Openville Timişoara mixed-use project, part of the premises having been leased as of last year.

In the near future, Timişoara will boast the tallest office building in Romania. The building will be located in the Openville mixed-use project that Iulius and Atterbury Europe are currently developing near Iulius Mall. According to a press release, the building – to be named United Business Center 0 (UBC 0) – will comprise 27 floors and will stand at a 155 meters height, thus surpassing the current tallest building located in Bucharest. The works commenced this April and contractors estimate the project will be completed in the fourth quarter of 2019.

“UBC 0 is one of the most highly anticipated buildings in the Openville Timişoara mixed-use project, as we noted based on the reactions and questions we get from the general public, as well as based on the feedback provided by members of the business community in the office and retail components and that are interested in reserving premises in this building,” stated Iulius representatives. The entrepreneurs’ interest is reflected into the lease agreements for UBC 0 premises that were concluded as early as last year, when the building was in its project phase. “We have a waiting list for UBC 0, the companies’ interest being motivated by two considerations. First of all, companies want to be present in the tallest building in Romania, which will become a symbol for Timişoara and a nationwide landmark. The second reason is a very pragmatic one: they require wide premises to consolidate their operations,” said Iulius representatives.

UBC 0 will include more than 52,000 sqm of office premises, almost as much as the aggregate area of the UBC buildings (two of which have been opened) provided in the project’s first phase of development. The surface areas on each floor will add up to at least 2,000 sqm, in the form of flexible premises, without interior columns, with abundant natural lighting, and that can be partitioned so as to adapt to clients’ requirements. “We are talking about requests from Iulius’ partner companies planning to grow their operations and implicitly expand their leased premises. Then there are requests from companies with large employee bases and wishing to relocate all their operations in a single building. Last, but not least, we have requests from global companies planning to open offices in Timişoara, in a building that is representative in terms of its image, as well as based on its functionality, facilities and benefits,” added the Iulius officials.

Major retailers and local entrepreneurs have also shown interest in the retail premises to be included in the tallest office building in Romania. Following in the footsteps of the two other buildings opened in the Openville project, UBC 0 will also combine office spaces with retail areas. Thus, the semi-basement and ground floor of the building will accommodate stores, restaurants or themed cafés, while event halls will be fitted on the first floor for organizing corporate or private events. “We have started receiving requests for the retail component of the building as early as two years ago, and the first contracts were actually executed at the beginning of 2017. This includes cafés, restaurants and services that are mainly operated by local entrepreneurs, as well as stores by brands of national repute,” said the Openville project representatives. What makes these premises so appealing to retailers? First and foremost this is due to the high client footfall ensured by Iulius Mall and the office buildings, as well as by the location of UBC 0 in the immediate vicinity of the park that the developers will fit out in the project. Not only will the building provide the most spectacular panoramic view of Timişoara from every angle, but it will also have direct access to the relaxation spaces designed in the upcoming park and those inside the shopping mall.

Set to become the primary business, retail and entertainment hub in the west of Romania, Openville Timişoara is scheduled to open in the fourth quarter of this year, upon completion of the first phase of development. This phase will include: 47,000 sqm of additional retail premises, 50,000 sqm of office premises in operation and another 52,000 sqm under construction, the park, as well as more than 1,500 new parking spaces and a vehicular traffic underpass.