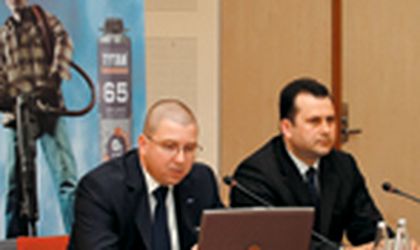 “We're planning a takeover on the local adhesives market especially as a result of the recent Warsaw Stock Exchange listing which provided the group with the necessary sum for such a transaction,” said Lucian Matei, product quality manager of Selena Group. Overall, the group runs 10 production facilities after the recent takeover of a Turkish company producing polyurethane foam.
Selena FM, the owner of Selena Group, listed 20 percent of the company's shares on the Warsaw Stock Exchange, following an IPO worth EUR 47 million. The firm's capitalization reached EUR 235 million, it announced. The company has budgeted investments ranging from EUR 62 to 80 million.
Following preliminary financial reports, Selena FM registered sales of EUR 140 million and a net profit of EUR 9.5 million in 2007. For 2008, the company estimates a turnover of EUR 168.5 million and a profit of EUR 12 million. In Romania, Selena is planning a turnover of nearly EUR 7 million in 2008, compared to EUR 5.3 million attained in 2007.