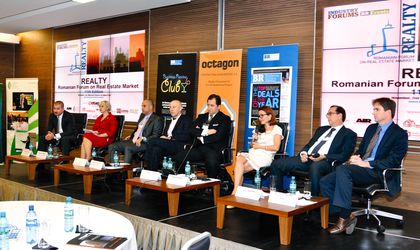 Confusion – this is the word on the lips of every developer, builder and participant in the 11th Romanian Real Estate Market Forum, Realty, organized by Business Review. No one could say with certainty what they expected from the future – maybe just more major change.

Since the beginning of the year up to EUR 83 billion has been invested in Europe, of which just 11 percent went to Central and Eastern Europe, including Russia, a proportion which is similar to France’s investment percentage. Of the total, 70 percent ended up in Poland and Russia.

So where does Romania stand?
“In 2008 and 2009 Romania was completely off investors’ radar, but today this is no longer the case,” said Radu Boitan, managing director of the real estate consulting company Jones Lang LaSalle.
According to him, at the beginning of the year the firm started to close transactions due to the New Year feeling, but as time passed the fear of a new crisis returned and projects and plans are again being postponed.

Ofer Drori-Lieberson, CEO of the real estate development company Tagor Capital, shared these mixed feelings on the local opportunities and recovery signs. “At the end of 2009 and during 2010 there was no interest in investing in Romania. Today we are seeing some signs of change, but it could just be wishful thinking as you have to have a little imagination to find them,” said
Drori-Lieberson, adding that there are rumors that some small investment funds are planning to start new constructions. In two or three years the crisis may be gone, and a developer who was inspired enough to invest in a property before the others would have
plenty to gain.

The presence of small investors was confirmed by Luciana Petrescu, project manager of the Romanian Real Estate Association.
“Some Arabian investors that have several millions of euro have asked me where they should invest, in what and when,” revealed Petrescu. The reality is that investors do not dislike Romania, but do not know what the winning real estate field will be.

Calculating the odds
“What will put the Romanian real estate market back on the right track? Nothing, as there never was a market. After gaining access to the EU, our economy was absorbed by the good growth climate coming from the European direction and we pretended we had the right market. We had all the actors, such as generous banks, consultant companies and greedy developers,” said Alexandros Ignatiadis, a leading figure in the local Romanian construction firm Octagon Contracting & Engineering.
“Now the main players are gone and we have realized we do not have the mature market in which we liked to believe.” This does not mean that developers and contractors are jobless, but they have to reexamine the market and its potential. There will be opportunities, but the demand will remain low and competition will grow stronger, he added.

At this moment, the most interesting markets are the retail and office sectors, according to Radu Lucianu, managing partner at Capital Property Advisors, while the logistic market is struggling to find the right mix of tenants to start projects. Office rents have dropped considerably, even in the most high-visibility projects in Victoria and Charles de Gaulle Squares.
“While three years ago rents were not negotiable for these areas, today we can speak about EUR 16-18 per sqm for the most desirable places, down from EUR 24-25 per sqm. Overall the market has become more flexible: owners are willing to sell their buildings, buyers are interested in buying for the right prices and tenants are willing to relocate,” added Lucianu.

There is still demand for office space, as large companies are interested in relocating to be closer to public transportation after their current contract ends.
“Developers forgot that location is the most important thing for a project. I guarantee you that if an investor puts his money into such a project, they will return,” stressed the Capital Property Advisors representative. A well thought out scheme with a good location, access to public transportation and some price opportunities can lead to a best-selling project.
“Now is a great moment to start building, so that by the time economy starts growing, you will have finishing the project and be welcoming the new tenants,” argued Daiana Voicu, managing director of Willbrook International, who added that although there is still rentable office space, it often lacks proper facilities.

As for the residential market, opinion is split regarding its future, as unaffordable mistakes were made in the past. Investors and developers believed that if they put their money into a plan, profits were guaranteed. They merely changed the name of the same overused business plan and boasted that they were big players, not giving a thought to the potential customer. Now such flats are empty and running up costs.
“We should stop waiting for signs of stabilization from Europe and find the potential from our own backyard. The days in which investment funds bought apartments are gone for a while, and this is not necessarily a bad thing because the domestic potential is great. You will sell if your project meets the final buyer’s demand,” said Drori-Lieberson of Tagor Capital.

The majority of empty projects were built to a completely obsolete design, not taking into consideration the average salaries of local buyers.
“Romanians are still in the grey economy, with half or just a third of their salaries on the books, and so cannot get credit. Until Romanian citizens make their employers pay their entire salary officially, nothing can be done. The government should also change income tax, as this drives the employers to avoid declaring the full salaries,” added Andrew Prelea, CEO of residential developer Ozone Homes.
“I believe the main problem rises because of the citizens` limited purchasing budget for acquiring residential products. So, shouldn’t we start the other way around, that is increasing the capital of buyers and then try to develop other type of  residential projects that fit the actual need?,” said Costin Banu, managing partner of Real Estate Investment Consulting But as employees are happy at the moment simply to have a job, they accept and will continue to accept payment “under the table”.

The cost of green
Building and buying green projects seems to be the latest trend, not only because tenants are interested in cost-efficient spaces, but also as some international groups will relocate only if the new space respects green corporate culture. The Willbrook Platinum office building is at present undergoing the procedure for Gold rated Green Building certification by LEED (Leadership in Energy and Environmental Design) and is gaining clients thanks to this movement. “Being
green helped us a lot during the leasing process.

There are companies with a strong corporate culture that are not allowed to move to other office spaces unless they are green certified,” said Voicu of Willbrook International, developer of the office building.
“There is a Chinese curse that says: may you live interesting times. And today I am starting to understand its` saying. If at the beginning of our association we hardly could establish a meeting with important developers and managers were answering the phone during them, today managers are calling us interested in obtaining green certificates and interested in general in what green means”, says Steven Borncamp, founding president & CEO of Romania Green Building Council.

But for many firms, building green means too expensive architectural plan, construction process and building construction materials.
“As we speak I am working on a project in Romania which should ultimately end up with Breeam (BRE Environmental Assessment Method) certification, and from my experience it costs more. In fact I am being paid more. What I can tell you is that Romanians love green as long as it costs the same as black,” said Ignatiadis of Octagon Contracting & Engineering. According to Capital Property Advisors’ Lucianu, building green costs 20 percent more, and should be developers’ choice as they have to invest in the project.

But the Willbrook International representative disagreed, and said that building green was not more expensive as long as you chose the right cost-effective design, building materials and so on. The various green certificates like Breeam, Leed and so on create confusion in the market, as each has its own set of rules and procedures which renders comparison difficult.

But the reality is that Romania, as a member of European Union, should start thinking about the EU’s set of laws that are trying to reduce pollution and increase green energy consumption.
These laws will start to be applied in Romania, and will inevitably affect developers of new and old buildings. Furthermore, the trend could become a rule as many investors and tenants will look to buy and rent buildings classified as green, and might not accept other types of projects.