Romania’s property investment volume in the first quarter of 2022 is estimated at EUR 68.5 million, a value that’s 7 percent lower than the one recorded in the same period of 2021. Analysts expect investments to reach EUR 1 billion in 2022, 11 percent above last year’s total figure, though it is difficult to make accurate predictions in this period marked by uncertainty.

Offices accounted for almost 80 percent of total investment volumes during the first three months, while retail accounted for the rest. The largest investment deal closed in Q1 2022 was the sale of the Record office scheme in Cluj-Napoca for a reported EUR 35 million. Speedwell sold the project to AYA Properties Fund from Belgium. The second-largest deal in Q1 was the sale of Vitantis Shopping Center in Bucharest, with approximately 36,000 square metres GLA. Revetas Capital sold the property to Praktiker Real Estate, according to a report by JLL Romania.

Q1 2022 marked a decrease in prime industrial yields, from 7.75 percent in the previous quarter to 7.5 percent. After consecutive contractions in the previous two quarters, prime office yields remained flat during Q1 2022, at 6.75 percent. Prime retail yields were also stable during the period, at 7.25 percent. Prime assets with WAULT (Weighted Average Unexpired Lease Term) significantly longer than the market average can achieve yields below those quoted as prime, with quality and ESG compliance (Environment, Social, Governance) playing a major role in future transactions. 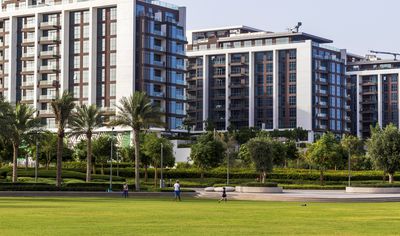 New leases had the largest share in total transaction volumes in Q1 2022, with approximately 60 percent of the total, followed by renewals and renegotiations, with 21 percent. The vacancy rate slightly increased during Q1 2022, from 13.7 percent in the previous quarter to 14.3 percent, also due to a significant volume of new offices being delivered during the period. Although most companies have started bringing their employees back to the office, the accommodation process is usually progressive: not all employees are required to work from the office every day of the working week, and to a certain extent, the hybrid practice of combining office and home work continues. The first quarter of the year saw a high level of new deliveries, totalling 73,500 sqm, compared to only 29,500 sqm in Q1 2021. The largest project delivered during Q1 was Sema Office London & Oslo, with a total of approximately 31,500 sqm GLA, developed by River Development in the Centre-West submarket. Two projects of roughly 21,000 sqm each were also delivered in Q1. The first one was phase 1 of @Expo, developed by Atenor in the North-West (Expozitiei) submarket, followed by Tandem, delivered by Forte Partners in the Centre submarket.

Another 83,000 sqm are due to be added to the market before the end of 2022, bringing total deliveries for the year to 156,500 sqm. This would represent a 36 percent decline compared to 2021. The Centre-West submarket will attract almost 60 percent of all deliveries expected for the year—over 90,000 sqm. The largest project expected to be completed by the end of 2022 is the second phase of One Cotroceni Park, developed by One United Properties, adding around 34,500 sqm to the Centre-West submarket. The second building in AFI Tech Park, developed by AFI Europe, will increase the stock of the same submarket by 24,500 sqm. The vacancy rate is likely to drop in 2022 due to the lower number of new deliveries over the next three quarters.

Following the decline in intensity of the covid-19 pandemic in Romania in the first quarter of 2022, the state of alert was lifted on March 9th, together with all remaining pandemic-related restrictions. This was encouraging news for the retail market, and it is likely to be reflected in second quarter figures. Retail sales increased by 5 percent year-on-year in March 2022.

After strong retail deliveries in the last quarter of 2022, only 16,500 sqm GLA were introduced in Q1 2022, only slightly more than a quarter of the deliveries of the previous quarter. By comparison, there no openings were recorded in Q1 2021. The only major retail project to be launched in Q1 2022 was Colosseum Mall, the 16,500 sqm shopping centre added to the existing Colosseum Retail Park in the north-west area of Bucharest.

Following a relatively low volume of new deliveries in 2021, supply is estimated to increase by 73 percent in 2022, up to a total of 184,100 sqm GLA, mostly through retail parks in medium and smaller cities. After the opening of Colosseum Mall in Q1, only 13,000 sqm are expected for delivery in Bucharest until the end of 2022, in two retail parks adjacent to residential developments: Greenfield Plaza, developed by Impact Developer & Contractor in Baneasa, and Lemon Park, developed by Synergy Construct in the Damaroaia neighbourhood.

In regional cities, the pipeline for 2022 is mainly represented by small and medium-sized retail parks. One notable exception is Alba Iulia Mall, with 28,900 sqm GLA, which will be delivered by Prime Kapital and MAS Real Estate.

Deliveries of industrial and logistics spaces totalled approximately 155,400 sqm across Romania in the first quarter, 36 percent less than in the previous quarter but five times more than in Q1 2021. Almost 81,000 sqm were delivered in the Bucharest region, representing nearly 50 percent of all completions. Another 25,000 sqm were delivered in Deva and 19,000 sqm in Constanta. At the end of Q1 2022, the modern rentable industrial stock in Romania totalled approximately 5.8 million sqm. Encouraged by strong take-up in 2021 and early 2022, developers plan to deliver another 530,000 sqm of industrial and logistics spaces by the end of this year. This would bring total completions for 2022 to 685,500 sqm, 30 percent over those recorded in 2021. If everything goes to plan, the total stock would reach 6.36 million sqm by the end of the year.

The number of transactions with new units in Q1 2022 stood at around 7,760 units for Bucharest and 1,680 units for Ilfov; 60 percent of the Bucharest transactions officially registered by the National Agency for Cadastre and Land Registration were for new units, while new sales represented 90 percent of the total transactions in Ilfov. This represents a 13 percent decline from the previous quarter, a predictable evolution based on seasonality. Despite the social and economic impact of the Russia-Ukraine conflict, the new housing sales market performed much better than expected in Q1, especially in March. Overall, the first quarter saw a 15.3 percent increase compared to Q1 2021 and a spectacular increase of 54 percent compared to Q1 2020.

This positive evolution is seen by analysts as a result of the record level of deliveries in 2021, with transactions being negotiated and secured in 2021 and concluded through  final sale-purchase agreements in Q1 2022. For the short and medium-term, analysts foresee that demand for new homes will be significantly impacted by the continuous increase of the key interest rate combined with high inflation rates.