Palas Campus update, Iași upgrade: IULIUS advanced with the works to level 4 out of 6 in the EUR 120 million mixed-use project 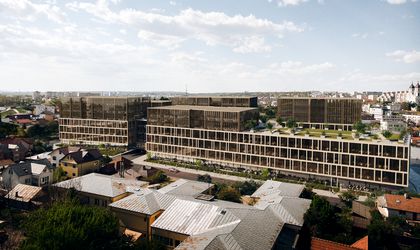 Construction works are advancing at a fast pace for IULIUS Group’s Palas Campus in Iași, the largest investment (€ 120-plus million) developed during the pandemic. Works are currently underway for the structure of the 4th of the total 6 floor in the mixed-use project combining premium office space, services and food & beverages retail with park features and public utility investments. For the project under construction, IULIUS Group already has a partnership with Amazon, who is set to provide the majority occupancy in Palas Campus, thus consolidating one of its strongest European hubs in Iași City.

54,000 sqm of premium office premises and 6,000 sqm of retail premises. That is the output to be delivered on the market by Palas Campus, whose estimated completion term is scheduled for 2022. Designed as an extension of Palas Iași, the first urban regeneration mixed-use project in Romania opened in 2012, the new project will consolidate the regional business hub downtown, set to add up to 130,000 sqm.

“We kick-started the works in July 2020, in the midst of a pandemic, and we are very glad we were able to keep up with the proposed pace. We have 400 people working at the same time on site on what is set to become one of the largest office buildings in the country. This new investment reaffirms our commitment to stimulate the development of Iași City, by creating economic opportunities and new jobs. The name choice – Campus – is a suggestive one, in that we want this to be a workplace primarily for the youth. Graduates would thus have the opportunity to switch from the university campus to the business campus, which a natural concern in any city wishing to retain its talents. Palas Iași came into prominence as the regional business center, accommodating the headquarters of many Romanian and international companies. I am confident that once Palas Campus is completed, Iași will be even more appealing for investors, which can also be an opportunity for their development in the region,” said Ionuț Pavel, Office Buildings Manager Palas Iași.

Palas Campus is an urban regeneration project, just like Palas Iași. By virtue of its location, the project is designed to revitalize an underdeveloped central area, namely Sf. Andrei. The building will have a gross built area upwards of 86,000 sqm and will be developed horizontally, as the six interconnected building blocks will have different heights, however standing no higher than 6 floors. In approximately eight months, the works have already advanced to the structure of the 4th floor. The façade panel installation process was also kicked off recently, which will further highlight the evolution of the construction endeavor. The Campus is an integrated mixed-use project set to include both class A office premises in line with international sustainability standards, and a retail component that will add to the comfort of employees and nearby residents. The project integrates a new food market concept with restaurants, coffee shops and terraces, everyday services and a dedicated area for local producers and entrepreneurs. “Palas Campus will be a landmark for the local office market by virtue of the technologies implemented therein, its generous and flexible surface areas up to 10,000 sqm per floor, as well as via the wellbeing concept. At the same time, this project is designed to contribute to the residents’ quality of life not only via the urban revitalization of the area, but also by means of the easily accessible integrated functions,” added Ionuț Pavel.

Palas Campus will support the development plans of the existing companies in Iași or those who wish to operate in this academic city, while also generating jobs. The project is estimated to create 1,700 jobs during the construction phase and more than 5,000 jobs once it is fully operational.

The urban integration of Palas Campus will be made via major upgrade works to the road infrastructure, which entail creating a new arterial road and widening another five adjacent streets, adding up to an investment upwards of 1.62 million Euro.

The Campus will comprise a two-level underground parking facility, with a capacity of 625 parking spaces. This facility will be the result of a 33.3 million Euro investment and will be accessible to both employees and residents in the area.

As with all the projects developed by IULIUS, nature is also present in the Campus via green spaces upwards of 4,500 sqm – alleys, squares, and leisure spaces accessible to the public. Furthermore, 650 meters of bike lanes, as well as secured bike parking spaces will be fitted in order for the Campus to encourage alternative mobility. Changing rooms and showers will also be fitted for the same purpose and as a perk for those who choose to mix their daily commute with sports.

The First Beneficiaries Of The “Go Local” Support Program For Local Entrepreneurs Opened...

IULIUS group is organizing an international architecture competition for a new urban development...