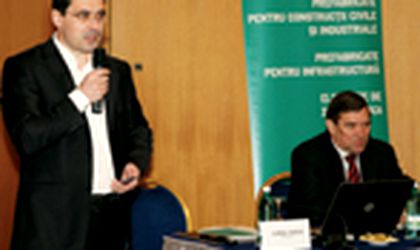 The fund, which is not yet in negotiations for another acquisition, but which expects to start working on new deals in the next two to four months, says Somaco will make a profit this year, despite a projected 20 percent fall in the construction material market. Representatives say Somaco's sales fell by around five percent in the first months of this year, but a comparison to last year would be biased by the production increase in the firm's factories. Oresa Ventures, which raised Somaco's production capacity by around 30 percent, wants to further invest EUR 10 million.
The fund has installed new management at Somaco Grup Prefabricate, which covers the factories' production. Gabriel Colobatiu, previously with ASA Turda, will be the new CEO, with Eugen Pitic, coming from Xella Romania, as commercial director. Sorin Miron, formerly CFO of Michelin Romania, becomes the new CFO, and Remus Benea from la Fantana operations director. The new head of the board, Bengt Jansson, joins from Finnish Consolis, one of the largest producers of prefab materials, where he was CEO.
Somaco Grup Prefabricate produces BCA and concrete prefabs, ready-mix concrete and aggregates. It runs three factories in Adjud, Buzau and Roman, with a sales focus on central and eastern Romania. Oresa Ventures, the Swedish investment company, brought the factories last year from local firm Somaco, which in the meantime changed its name to SMC Prefabricate pentru Constructii, a Rasdaq-listed company. The fund has so far invested EUR 150 million in CEE firms. In Romania, it fully controls Fabryo; Kiwi Finance, where it has an 80 percent stake; Trinity, with 60 percent; La Fantana, with an 80 percent package; and Flamingo, with a minority package of 6 percent.
Corina Saceanu