One United Properties doubles posts turnover of EUR 184.2 million in the first nine months of 2022 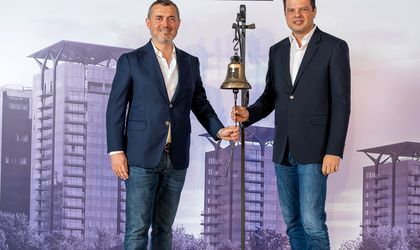 One United Properties (ONE), the leading Romanian green developer of residential, mixed-use and office real estate, posts a consolidated turnover of 184.2 million euro in the first nine months of 2022, a 43% increase compared to the same period of 2021. The gross profit doubled year-on-year, reaching 97.2 million euro, while the bottom line increased 119%, to 85.3 million euro.

The Group continued in 2022 investments in the Romanian real estate sector, maintaining at the same time a strong cash position of 140.4 million euro, a 37% increase since the beginning of the year. The gross loan-to-value indicator was 31% as of September 30th, 2022.

“The third quarter of the year brought another series of significant topline increases for One United Properties due to sales kickoff at newly permitted developments One Herastrau Vista and One Lake Club, as well as continued solid sales for the developments that will be delivered in 2023. The acquisition loan for office building One Victoriei Plaza and other drawdowns for various developments have slightly increased our gross loan-to-value ratio to 31% as of Q3 2022. Nonetheless, we are maintaining the low leverage of the Group compared with the European peers. Most notably, the net debt as of Q3 2022 equals 20.2 million euro, which is 2.4% of the total assets of One United Properties that stood at 830 million euro. We are confident that these indicators, pointing towards a strong position of our business, are also recognized by our shareholders, especially if we analyze from the perspective of the evolution of the ONE share price from the beginning of the year until now, clearly outperforming other European public real estate companies. Also, the price volatility of a ONE share is at a much lower level compared to the peers,” said Victor Capitanu, co-CEO at One United Properties.

The increase in turnover was supported by a 14% increase in revenues from residential property sales, which reached 121.1 million euro in the first nine months of 2022. The net income from residential property increased 55% year-on-year, reaching 56.4 million euro as most of the developments get closer to completion. This generated a 47% net margin, a 12pp appreciation compared to the first nine months of 2021.

“In Q4 2022, 1,759 new apartment units were added to our sales team portfolio, following the receipt of the permits for One Mamaia Nord 2, One High District, One Floreasca Towers, phase 1 of One Lake Club, as well as the decision to reconvert an office building within One North Gate to residential development One North Lofts, currently pending the building permit. Before the year end, we additionally estimate to receive the building permit for One Lake District, a new One community which will host 2,000 families. The file for permitting One Lake District is already with the relevant authorities, confirmed to be 100% complete. Consequently, we consider that the temporary issue with the stock availability has been resolved, and we are currently focused on delivering the almost finalized developments, such as One Verdi Park and One Floreasca Vista as well as accelerating the construction at the newly permitted developments, for which we see a growing demand,” said Andrei Diaconescu, co-CEO of One United Properties.

The rental income, which includes the income generated by the office as well as retail divisions, registered a 30-fold increase, reaching 8.4 million euro. The effect has been driven by the revenues coming from tenants at One Tower, which was leased out 100% as of September 30th, 2022, One Cotroceni Park Phase 1, leased out at 83% as of September 30th, 2022, however not yet generating full income since many tenants are still in the fit-out phase. It also includes revenues generated by One Victoriei Plaza, office asset acquired in Q3 2022 and 100% leased out, as well as the impact of rent generated by Bucur Obor, consolidated under the commercial division. The management estimates that the revenues from rental income will continue to grow quarter-on-quarter, bringing even more significant weight in Q4 2022, given the positive impact of One Victoriei Plaza and Eliade Tower, as well as starting from 2023, when One Cotroceni Park Phase 1 will start to generate the full lease as well as tenants will begin to move in One Cotroceni Park Phase 2 (currently pre-leased out at 52%, but not yet finalized).

In the first nine months of 2022, ONE was the 9th most traded stock in terms of absolute liquidity, registering trades of approximately 35.4 million euro and 13th by liquidity to free-float. As of September 30th, 2022, the company’s market capitalization was 653.2 million euro, making One United Properties the most valuable entrepreneurial company listed on the Bucharest Stock Exchange. In a volatile 9M 2022, ONE shares performed better than the benchmark index BET, delivering a total return of -8.7%, a better performance compared to BET-TR (-10.5%) as well as key European real estate indices (EPRA index -39.5%, ELUK index -37.8%, SX86P index -41.6%).

As of September 19th, 2022, One United Properties shares were upgraded within the FTSE Global Equity Index Series for Emerging Europe, moving from the small-cap to the mid-cap category, reflecting the increased market capitalization as well as the solid liquidity of ONE stock.

One United Properties posts a turnover of EUR 136.7 million and a gross...