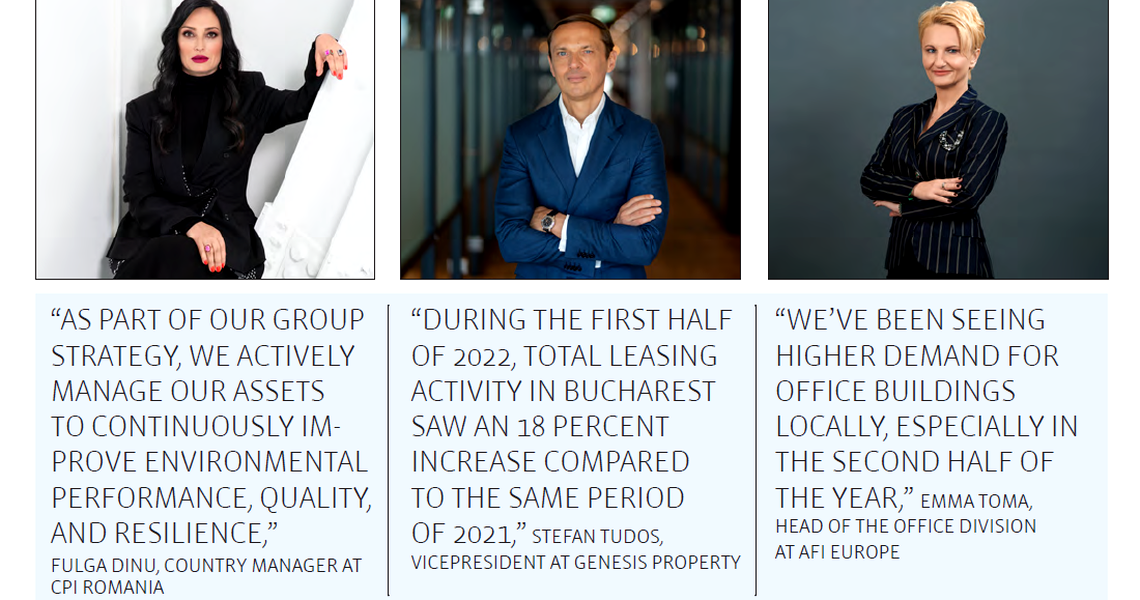 The office market is going through a period of stagnation, with demand values that are similar to 2021’s. Office deliveries have slowed down and will remain at a low level in 2023. In the first 9 months of 2022, the total demand for office space in Bucharest stood around 200,000 sqm, resembling last year’s levels. Net demand increased by 5 percent year-on-year to around 106,000 sqm. A total of 65,700 sqm were leased in Q3, a volume almost identical to the one recorded during the previous quarter, according to JLL data.

The first half of the year brought good results for the office market. “The Bucharest market had a positive evolution throughout 2022, especially if we’re talking about the Class A segment, on which Genesis Property operates. In the first semester, almost 100,000 sqm of Class A offices were delivered (4 new buildings), and around 42,000 sqm (2 new buildings) are due to be delivered by year’s end, taking the modern office stock to approximately 3.34 million sqm, according to CBRE research. During the first half of 2022, total leasing activity in Bucharest saw an 18 percent increase compared to the same period of 2021, with deals totalling almost 132,000 sqm,” says Stefan Tudos, vicepresident at Genesis Property.

“On this market, the tenants are usually multinational companies with multi-year contracts and, in the context of redesigning work in the post-pandemic period, with a focus on socially relevant amenities and strengthening the professional community, there is a favourable outlook for this segment’s evolution. However, demand will mainly increase for premium Class A offices that can accommodate the new lifestyle and working trends, with less of an emphasis on the space itself and more on the networking, interaction, connection, and culture it creates for employees,” Tudos adds.

The return of employees into offices is pushing up demand for spaces. “We’ve been seeing higher demand for office buildings locally, especially in the second half of the year, which was triggered by a wave of employees coming back from remote work. For AFI Europe, 2022 was a productive year: we leased about 30,000 sqm GLA of offices, mostly through new contracts, we launched the second phase of the AFI Tech Park office campus, we completed the AFI City Bucurestii Noi shopping gallery, and broke ground on the AFI Arad retail park. Additionally, the pandemic period and the fact that many tenants worked from home allowed us to make improvements across most of our office projects, including refurbishing all common areas in the AFI Lakeview building, creating a lounge area for tenants at AFI Park Timisoara, installing ionisation-based air purification systems in all of our projects, as well as obtaining WELL Health & Safety Certifications for our office projects,” says Emma Toma, Head of the Office Division at AFI Europe.

“Despite the challenging macroeconomic and geopolitical contexts, we at CPI Romania take pride in stating that we’ve had yet another very successful year in our office line of business as well. As part of our group strategy, we actively manage our assets to continuously improve environmental performance, quality, and resilience. We’ve thus continued to expand our myhive office brand by carrying out a comprehensive refurbishment of the Victoria Park building, and at the same time, we’ve made various ESG-compliant upgrades to other buildings. This has proved to be the right approach, as this year we’ve managed to secure over 40,000 sqm of leased space, with 75 percent new leases and 25 percent extensions,” says Fulga Dinu, Country Manager at CPI Romania.

As part of their efforts to adapt to changes on the labour market and new hybrid work formats, companies are turning to specialised services to make the transition as smooth and efficient as possible. In response to market demands, CBRE has developed a specialised workplace team that provides workplace management & strategy services for companies in fields such as IT&C, shared services, pharma, etc. CBRE is the only local company that integrates the entire set of services for transactions and office space configurations, and it also has a suite of architects who complement the teams of consultants in its Office department. “When we talk to our partners, we are always thinking about the change process for the company’s employees. We begin to understand the organisation and culture, we design solutions together with their project teams, and take care of communication and implementation. This ensures that we have a finished product with which the stakeholders will resonate. It is increasingly difficult to deliver a successful development project without the change management component,” says Mihaela Topor, Senior Workplace Consultant at CBRE

Flexibility is an important factor that companies must cover in order to keep employees happy. “Employees are returning to the office in growing numbers, adopting hybrid work patterns that fit their current and future lifestyles, although the pace of return differs from one company to another. With somewhere between 1 to 4 days per week in the office, employees are more focused than ever on maintaining a healthy work-life balance, while employers are making more efforts to create a work environment and culture that meet workers’ expectations. Flexibility is the key word these days, and the hybrid system is currently the preferred option for both employees and companies. In this equation, the office keeps a central role, provided it is properly equipped and offers employees multiple options for interaction and collaboration,” Stefan Tudos explains. The hybrid work model has been adopted by 70 percent of companies in the EMEA region, with Romania having a similar share. For example, AFI tenants prefer to work from the office for at least 3 days a week. “There is also a growing trend for developing co-working spaces to better suit hybrid work. Some companies are choosing to rent temporary or long-term co-working spaces so they can have flexibility in their operations,” Emma Toma notes.

Prices are going up

According to JLL, after an increase in Q2 from EUR 18.5/sqm/month to EUR 19/sqm/month, prime rents maintained the same level in Q3. However, given the inflationary pressures, further rent increases are possible over the next few quarters. “The evolution of rents in office buildings has been influenced by the rising costs of construction materials, the energy crisis, and the overall economic instability and inflation. Moreover, particularly in Bucharest, we are experiencing a stock decline because of the lack of new constructions, which will lead to an increase in rents in the coming period,” Toma adds.

“Overall, rents have slightly risen this year amid improved demand and higher inflation. The size of the increase varies widely, depending on the quality and location of the offices. The most significant changes have been recorded for Class A offices in Bucharest, which provide very good conditions in terms of both facilities and connectivity. We expect to see further growth in this segment, as demand for premium offices is likely to increase and future supply will dry up due to the current unfavourable market conditions for the construction of new projects,” Tudos says.

“As part of our group strategy, we actively manage our assets to continuously improve environmental performance, quality, and resilience,” Fulga Dinu, Country Manager at CPI Romania

“During the first half of 2022, total leasing activity in Bucharest saw an 18 percent increase compared to the same period of 2021,” Stefan Tudos, vicepresident at Genesis Property

“We’ve been seeing higher demand for office buildings locally, especially in the second half of the year,” Emma Toma, Head of the Office Division at AFI Europe