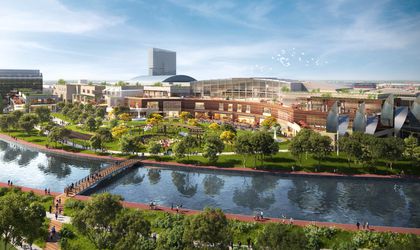 With more than a decade’s worth of expertise in developing and operating mixed-use urban regeneration complexes in Romania, the only projects of this kind in the country, IULIUS Group is now launching a new project in Cluj-Napoca.

The investment upwards of half a billion Euro focuses on the Carbochim platform, set to become the largest urban reconversion project on the Romanian market. This urban development endeavor will transform the industrial area into a vibrant space in Cluj and will be integrated as part of the city. The Carbochim factory will be relocated this year and upgraded, without any periods of business interruption. The new project includes: the largest retail area in the country (115,000 sqm) * a center dedicated to performing arts * conservation of two industrial heritage buildings and reintroduction thereof into the public circuit * a model of integrated approach to green spaces, connecting the urban garden spanning on 4-plus hectares with the adjacent parks, and a complete reconfiguration of the road and pedestrian infrastructure * a new bridge and a pedestrian walkway over Someș River * an eco-neighborhood integrated in a mixed-use project * bicycle and pedestrian infrastructure along the Someș River waterfront * consolidating a new business hub * the largest underground parking lot in the country, with 6,000-plus parking spaces.

After 15 years of presence in Cluj-Napoca, IULIUS is launching the largest urban reconversion project in the country. Using a massive investment, estimated upwards of half a billion euro, the Carbochim industrial platform will be converted into a destination of the city, a unique meeting place for the community. As far as magnitude of investment, urban development impact, and diversity of the uses integrated therein go, this will be the most prominent project in Transylvania, after the Cluj-Napoca metro line project.

Carbochim is the largest manufacturer of professional abrasives in Romania. The industrial platform spans on approximately 14 hectares, with less than 30% of the area currently utilized for manufacturing purposes, while the rest is either underused or residual. The factory will be relocated this year in the industrial area of the city, in the former industrial facilities of Tricotaje Someșul on Muncii Boulevard. More than € 5 million will be invested in relocating, modernizing and upgrading the production unit, without interruptions to its activity. 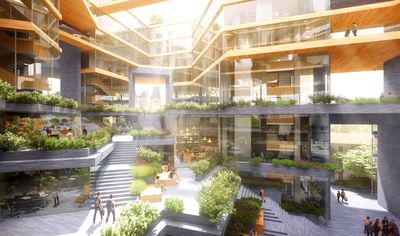 “We want to give to the city a piece of itself by transforming the Carbochim platform into a space for the entire community. The urban reconversion investment will be a large-scale one, in line with the general urban development strategy of Cluj. This project is designed for the present, but also for the generations to come. It expresses our vision of gratitude for the past by continuing the industrial activity, while also creating the future via a sustainable and resilient project,” said Iulian Dascălu, President of IULIUS Company.

Spaces for music, arts and entertainment

The new development proposes an exemplary implementation of international best practices for integrating cultural-industrial heritage in a real estate investment: two monumental buildings on the Carbochim platform will be converted and given back to the community as cultural and experiential spaces.

This marks the first time in Romania when a mixed-use project integrates an independent space dedicated to performing arts, as partnership with the cultural sector. The old Carbochim facility will be converted into a live-arts center and will be managed by some of the most prominent cultural organizations and festivals in Cluj-Napoca, providing the community with a venue for concerts, theater and contemporary dance performances, as well as fashion, design and media arts events.

In addition to the live-arts center, the urban reconversion project includes an amphitheater and spaces for outdoor events, a theater and cinema hall, numerous coffee shops featuring international themes and concept-restaurants.

The second building to undergo conversion is the factory administration building, set to be transformed into a space that reunites both coworking facilities and pilot-spaces for promoting entrepreneurs, encouraging local talents and innovative initiatives.

The entire project will open towards Someș River and will be coordinated with the waterfront fit-out masterplan of the Municipality, integrating naturally in the new green & blue axis of the city. A bicycle and pedestrian route will connect three parks in Cluj-Napoca: Armătura Park, Feroviarilor Park and the new garden upwards of 4 hectares fitted in the mixed-use complex. The new development will have a panoramic view of one of the largest integrated green area in the city (more than 12 hectares).

The investment also includes the redevelopment of the Someș River waterfront on the segment between Armătura Park and Porțelanului Bridge. The waterfront will be converted into a leisure area, with outdoor sports facilities and leisure options, being connected to the project via pedestrian walkways.

The entire area will benefit from a systemic approach to fitting-out green areas, being a model of good practices in aligning a real-estate development to the public investment strategy, as well as to the need for outdoor experience, interconnection and escape.

A green neighborhood in the greenest area of the city

The residential component of the project will be designed based on a straightforward principle: the prospects of a place where you want to live. A new generation of residential units, currently in the design phase, will overlook Someș River and the integrated park and garden areas.

The residential units will be designed in line with quality of life and sustainability principles, with generous floor areas above current market standards, glazed façades, ample individual terraces, shifting the focus from space saving to flexibility, and combining indoor-outdoor activities. Their future residents will spend less time in traffic and will enjoy more comfort owing to the accessibility to services, facilities, social and entertainment uses, and closeness to nature, all integrated within the same development.

The largest retail area in Romania – focus on relevance and experience

New high-end brands, anchors that cater to families, the most diverse food & beverage mix in the country, a fresh market supporting local entrepreneurs and producers, and entertainment concepts marking national premieres will transform the largest retail area in Romania with a leasable area upwards of 115,000 sqm into a regional leisure destination, both indoor and outdoor, for people of all ages.

In a first phase, the development will include 23,000-plus sqm of smart green office spaces, that will help consolidate the local presence of certain multinational companies, in an area set to become one of the strongest business hubs of the city in the coming years.

The investment entails the urban restructuring of the entire area, both by remodeling the Someș River natural axis, and by rethinking the infrastructure of the area, in order to enhance connectivity with the neighboring areas and the rest of the city. The most important feature is creating a new bridge over Someș River, north of the railroad, an investment that will complete the transit ring between Porțelanului Bridge and Răsăritului Bridge. Concurrently, this endeavor also entails creating new roundabouts, widening streets and creating new pedestrian access points providing connections to the city, all integrated with the public investment projects planned for this area.

The development is pedestrian-centric, implementing “walkable city” principles and providing facilities to encourage public transit. It will also feature the largest underground parking facility in Romania, with more than 6,000 parking spaces, as well as 3,500-plus bike parking spaces and electric vehicle charging stations.

The investment will be made in partnership with Atterbury Europe. The project is undergoing the analysis, consulting and authorization phase, with construction works expected to begin in early 2023. This is a project open to the people as early as the current phase, inviting the community to present their views on the industrial platform reconversion online at www.partedincluj.ro.