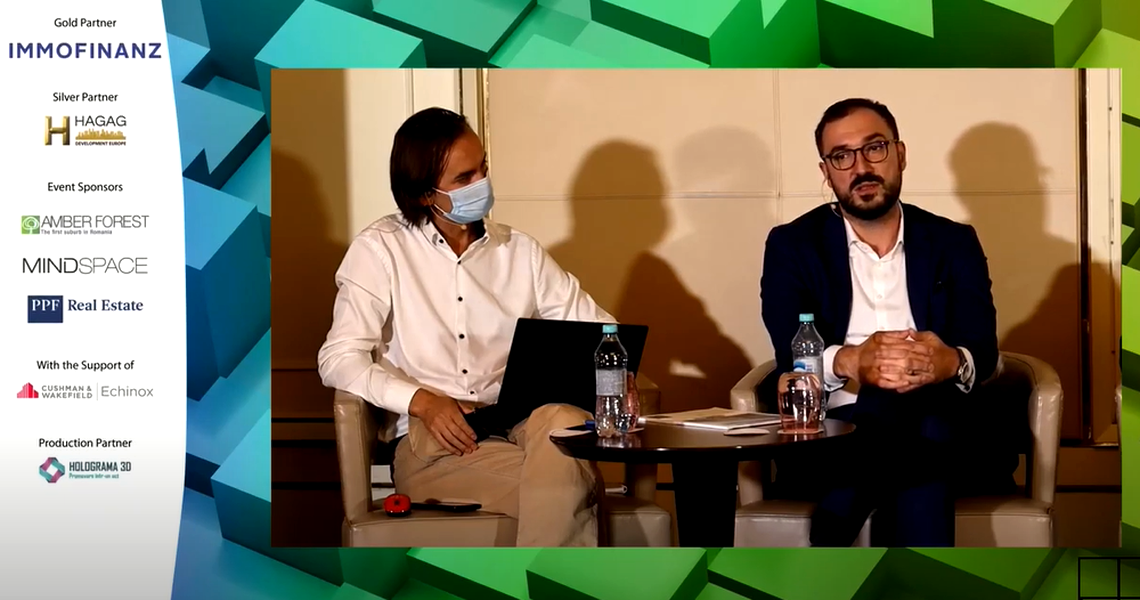 The need for industrial spaces grew exponentially in 2020 (the best year for the industrial and logistics property market in the past 30 years in terms of demand), becoming a so-called “star-sector” of the Real Estate industry. To find out how the sector fared in H1 2021 and if the upwards trend can be sustained, Business Review turned to Andrei Brinzea, Partner | Land & Industrial Agency at Cushman & Wakefield Echinox, during the recent REALTY Forum 2021.

“For us, 2020 was an extraordinary year, we witnessed incredible growth. In January 2020 we were all sitting in our office looking at a pipeline of projects that wasn’t exactly spectacular. Then the pandemic came and there was a month, a month and a half of panic, when the industrial sector was completely silent, nothing was happening. Then suddenly, from April-May until December 2020 almost 1 million sqm were traded, which had never happened before.” Says Andrei Brinzea.

For online retailers, every billion euros traded online needs about 150,000 sqm of storage, shows Brinzea. “A 2017 study showed that the online market was predicted to reach EUR 6 billion in 2025. Well, this figure was reached in 2020. If we follow the growth of online commerce we will understand what it means to increase storage capacity. As a country, Romania did quite well in 2020, surpassing the psychological threshold of 5 million built sqm, of which some 4.4 million sqm are strictly at large developers, the rest being class A warehouses of various sizes owned by other privates. Compared to other markets, we are still lagging behind, so the potential for growth is enormous. For example, the Czech Republic has 8 million sqm of industrial space, while Poland has around 18 million sqm.”

2021 started off at the same pace as 2020, Andrei Brinzea explained. “In Q1 approx 200,000 sqm were traded, which is another record. Q2 was a bit more shy, with around 150,000 sqm traded, but we are extremely optimistic for the end of the year. Starting with September we will see the same accelerated pace as in the first half of the year. If the same trend continues until the end of the year, we will reach somewhere around 700,000 sqm traded in 2021. But I am a bit more optimistic and I think we will reach 900,000 – 1 million traded sqm this year as well.”

“If we look at the developers’ pipeline, currently around 450,000 – 470,000 sqm are under construction. There are also enough tenders in the market for new projects, from production units to warehousing, to generate another 300,000 – 400,000 sqm by the end of the year. We hope to see new developments also in cities that have been less frequented by developers so far, such as Iasi for example. For the industrial segment, Moldova is not so attractive due to the lack of infrastructure. But Moldova is attractive for retail players who prefer a more central position, such as Bacau or Roman, from where they can take their goods to other parts of the region. However, Bucharest remains the main business pole in the industrial segment, generating over 60% of the total volume traded, followed by Timisoara and Cluj. We hope that in the next period we will see the southern area of Bucharest developing because currently, the whole modern industrial pole is situated between the A1 and A3 highways, where there is a good transport infrastructure and where everyone is crowded, which denotes a competition issue, because you have projects placed next to each other and the price becomes the only differentiator.” Says the Cushman & Wakefield Echinox partner.

The biggest challenge of industrial projects

“The main challenge in the industrial segment is the price of building materials, which at the moment has increased quite a lot, and the delays in the delivery of certain materials needed to build the warehouses. It becomes very difficult for a developer to assume a delivery date, and these floating contracts have appeared where constructors do not give a fixed price but give a fixed margin with an open book contract.” Explains Andrei Brinzea.