The UK is the 5th or 6th biggest export destination for both Romania and the country’s major trading partners – Germany, Italy and France, meaning that a negative Brexit scenario would have significant second round effects via Romania’s other trading partners, which conduct a significant amount of business with the UK. According to estimates by real estate consultancy Colliers International, the stock of modern industrial spaces is expected to grow considerably by 2023.

Romania’s goods exports to the UK are nearly two thirds larger in terms of absolute value than the service exports, but the latter likely have more embedded value as British demand generates around 12 percent of external demand for domestic IT services, for instance.

Strictly on the goods side, the UK is a major destination for various manufacturing sectors (including the automobile industry), the textile sector and agriculture. Around 9 percent of Romania’s car exports head to the UK, with a hefty export demand also coming for various car parts; in the women’s apparel segment, the UK attracts over one quarter of the exports.

“A negative Brexit scenario could lead to a significant short-term impact, but it would also lead to longer-lasting effects as global value chains have become more closely integrated and Romania’s biggest export partners do a considerable amount of business with the UK. Over a longer term, it is quite difficult to say how things will settle, though Romania’s relatively low wages, healthy productivity gap to labor costs and good connectivity to Western European markets would offer some advantages,” says Laurentiu Duica, Partner, Head of Industrial Agency at Colliers.

Overall, industrial and logistics take-up increased some 40 percent in the first three quarters of 2019, to 306,300 sqm, but this figure is nearly 27 percent below the same period of 2017. This year still looks solid overall (including the fourth quarter), according to the Colliers analysis. 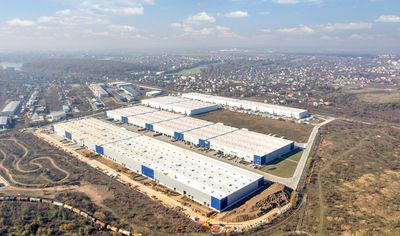 The domestic industry is already contracting amid less than favorable indicators coming from Romania’s major trading partners (Germany in particular). One of the staples of Romania’s industry  – its auto sector –  is likely to feel the pinch of global trends, with the auto manufacturing sector seeing its first decline in a decade.

Private consumption remains quite decent in Romania amid (still) double-digit wage growth in year-on-year terms, meaning that the need for industrial and logistics spaces assigned to the expanding retail sector throughout Romania should remain a driver in 2020; so will the expansion of e-commerce, which is growing quite fast alongside traditional brick-and-mortar operations.

The industrial and logistics stock will grow considerably in the next three years (by 2023), Colliers specialists say, as long as infrastructure projects really start to become visible and fiscal policies do not experience major changes designed to discourage investments in this segment.

BR Exclusive | Cosmin Căpățâneanu, KLG Europe Romania: The world around us is...