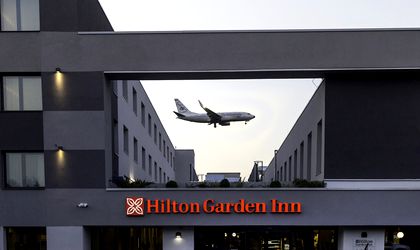 Hilton Garden Inn Bucharest Airport Hotel, part of the Lithuanian group Apex Alliance Hotel Management, celebrates two years since its inauguration with a steady increase in reservations and an occupancy rate that increases month to month, reaching 70% in July.

The hotel, built in 2019 following an investment of 19 million euros, is part of Hilton’s portfolio of “focussed hotels” brands and addresses especially the business tourism segment.

“The second year of activity coincides with a challenging period for the entire hospitality industry, in which we have maintained the standards and ensured safety for our guests. We record a more than double-digit increase in occupancy compared to last year, which we want to maintain throughout the year”, said Irina Semaca, General Manager of Hilton Garden Inn Bucharest Airport.

The last year has also strongly influenced the requirements of most guests, who are now more attentive and interested in services that reduce risk and provide increased personal safety. Thus, in addition to the security measures implemented, most often tourists are also looking for a flexible cancellation policy when booking a hotel.

“Since we are next to the airport, we are hotel with a usually higher occupancy compared to hotels in the city, and this allows us to quickly notice the positive signs. The difficult part is the lack of specialized staff, a common denominator of the hospitality industry”, added Irina Semaca.

The hotel has a team of about 50 employees and aims to gradually grow with the return of business tourism. The main challenge, complementary to the evolution of the pandemic, is to attract qualified candidates.

Hilton Garden Inn Bucharest Airport continues to hold the # 1 position in the Tripadvisor ranking for the city of Otopeni and won the Traveller’s Choice 2021 award.