Euromall investors in talks over a second mixed project 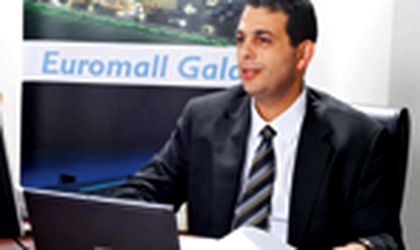 Having started in Romania with retail, Euromall is now taking a different track than it had initially envisaged. While expanding in Georgia and looking at Slovakia and other countries in the region, the aim is to allot 70 percent of its resources in Romania. “We took our experience in Romania and went to these markets. Georgia looks very much like Romania three to five years ago,” says Tomer Barhom, one of the investors in Euromall.
One year ago, the French shareholders controlling Euromall decided it was time to switch from retail to the residential hotspot. “Retail will only cover 30 percent of our future plans, ranking last. We will focus on offices and on residential,” Moshe Turgeman, investor in Euromall, told BR.
Developers who are planning malls under 50,000 sqm are facing issues with finding a suitable FMCG operator to anchor these malls, Rodica Preda, marketing manager with Euromall, added.
Barhom believes high-rise buildings will be the next step in Romanian real estate, as land prices are still going up. “It is what we will do next. High-rise can host both offices and residential,” he says.
The developers are on site with the Euromall Galati retail project, after having opened a similar scheme in Pitesti. Both projects were sold to investment fund Immoeast. A residential project in Baneasa is being developed in partnership with the same investment fund. The value of the investment could reach EUR 150 million in total. “We are looking to develop some other projects with them,” says Barhom. He remembers there were seven investment funds interested in taking over Euromall’s retail projects in Galati and Pitesti, both funds already active on the market and others which were planning market entry through these acquisitions.
“Immoeast was looking for something to buy, and Colliers made the connection between us and the investment fund. We had a good chemistry with them. We first sold the Galati project, and then the one in Pitesti,” said Turgeman.
They went on to plan the residential project in Baneasa together, for which construction works should start this summer and which should be ready in two years. “Some other funds are negotiating with us to develop other projects,” said Turgeman without disclosing details.
“We are starting the project in Oradea by ourselves and then we will look for a partner for the project,” Turgeman added. The EUR 500 million mixed project is now in the master-planning and approvals stage.
While not complaining loudly about shrinking development profits in Romania, which makes it a country like many others in which to work in real estate, the two Euromall investors are however concerned over the increasing price of land and, more important, a change in the sellers’ attitude towards the sale. “Romanian landlords are now thinking like developers. They calculate how much the developer will make from the project, so they are taking a part of the developer’s profit when asking a certain price for the land,” Barhom said.
“Some time ago, everybody was simply talking about price per sqm of land, and prices were expressed in this way. Now land owners are expressing price of land by converting the actual price per sqm of land into the land’s weight in the cost per built sqm. So they are making calculations for us, based on how much we could build on that piece of land,” added Turgeman.
Despite these issues, Barhom would pay by ten to fifteen percent more than the market price for a piece of land, if the location were good. The highest price paid so far by the Euromall investors was EUR 25 million for a piece of land outside downtown, triggering a EUR 1,000 per sqm price tag. “We receive five to ten land sale offers each and we check them all, because it is difficult to find something suitable,” said Barhom. He is now looking for land in Bucharest for future projects.
As Romania is not an easy market, they believe in one to two years, less experienced developers will be facing problems. “Until now, the market has corrected the stupidity of bad developers, as the market was going up. This will soon change, as the market is no longer growing at the same pace,” said Turgeman.