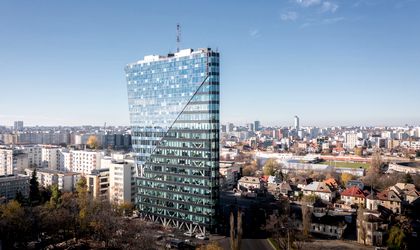 LEED Zero Carbon, part of the LEED sustainable development certification methodology, is the most stringent program in the world for assessing carbon neutrality in buildings.

„This is the 3rd „first” in the history of Euro Tower – starting from the first green certification ever obtained in Romania (2010), followed by the first building to reach carbon neutrality (2019 – 2021) and, now, the first LEED Zero Carbon certification in the country. We can say without doubt that Euro Tower, often  referred to as Romania’s first green building during the past decade, can now be officially considered the country’s landmark in sustainable development per se. Our vision, as a real estate developer, is to ensure all necessary aspects in order to maintain Euro Tower’s carbon neutrality also in the upcoming years” – states Alex van Breemen, Cascade Group.

Developed by Cascade Group, Euro Tower is one of the landmark class A office buildings in Bucharest, having a total area of 18.000 sqm. structured on 18 floors and 5 underground levels, plus 200 parking spaces. In 2009, Euro Tower obtained the BREEAM Very Good certification, becoming the first building in Romania to be officially confirmed as being Green according to global sustainable development methodologies.

Cascade Group, Euro Tower developer, has embarked on a comprehensive process of long-term neutralization of all CO2 emissions a few years ago, as part of a long-term decarbonization strategy. The decarbonization strategy was developed and conducted by BuildGreen, leading provider of certification and advisory services for sustainable development in Central and Eastern Europe. Euro Tower reached the level of carbon neutrality in 2019, as well as in 2020, according to the assessment of the building’s degree of CO2 emissions during that period.

„Zero Carbon certificates and systems are the next step in sustainable building, as carbon neutrality and reduction of CO2 emissions are a worldwide priority. In this context, Euro Tower will remain Romania’s milestone in sustainable development, the starting point which broke the mold towards carbon neutrality and set the ground for higher certification requirements and lower CO2 emissions” – states Răzvan Nica, Managing Director BuildGreen.

„However, we’re just getting started. Carbon neutrality is a must across the Globe, but the exact tools for reaching it are still under development. With buildings responsible for circa 40% of energy-related greenhouse gases, the population grows and the space per capita increases, the relative importance of buildings to the climate also increases, together with pressure over real estate developers and investors” – explains BuildGreen Managing Director.

In the context of an increasing need for drastic reduction in greenhouse gas emissions, LEED Zero represents an addition to the LEED certification programs and sustainable goals. The LEED Zero certification program focuses on 4 key areas (carbon, energy, water and waste). LEED Zero Carbon is primarily concerned with carbon emission as a result of building development – recognizing a building that is operating with net-zero carbon emissions over a year.

Decarbonizing the carbon footprint of a building requires the use of all materials and technologies capable of ensuring energy efficiency and minimizing CO2 emissions, implementing the most efficient solutions for building construction and operation, as well as the offset of CO2 emissions that are imposible to eliminate or to control in the development process (e.g. generated by tenants through their normal activity, emissions generated by water supply and sewerage).

As a differentiating factor for Euro Tower in the decarbonization process, the offset included in addition to the building’s carbon footprint also the carbon dioxide emissions generated by the building’s Tenants, benefiting them directly.

Another differentiator is that all CO2 emissions are calculated and compensated in order to reach all 3 scopes, according to GHG protocol (Greenhouse Gas Protocol) – Given that, globally, most companies are primarily concerned with scopes 1 and 2, scope 3 being the biggest challenge of the moment in all decarbonization strategies (CO2 emissions from suppliers of materials or services, or other sources difficult to control).

BuildGreen assisted the developer from the beginning offering consultancy and valuation services in line with BREEAM and LEED methodologies, advice for sustainable design and procurement, as well as for defining the long-term decarbonization strategy. Răzvan Nica, BuildGreen founder and Managing Director, is also the assessor that managed Euro Tower BREEAM certification in 2009, turning the building into a first on the Romanian real estate development market.

Founded in 2010, BuildGreen is one of the most active consultants in the field of sustainable development, with an expertise that covers over 18 EMEA countries. In its 12 years of activity, BuildGreen managed the sustainable development and certification processes of over 350 real estate projects, with a surface of over 8 million sqm. and an overall investment value of over €10 billion. Razvan Nica, founder and managing director of the company, is also the first BREEAM International Quality Auditor outside the UK, a position from which he supervises BREEAM certification processes across the entire Globe.