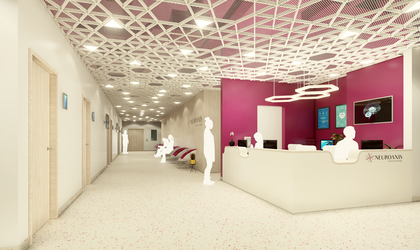 TESSERACT, the only architecture studio in Romania specialized in medical architecture and one of the very few such studios in CEE sign the design and interior fit-out concept of the new Neuroaxis medical clinic, relocated in Bucharest downtown. The new clinic location is at the ground floor of the new U Center office building and it is a fluent, patient-centric medical insertion, in line with the modern office buildings standards, in the context in which the neurology segment is still underdeveloped in Romania.

The interior design concept reflects Neuroaxis central idea – the connection between the members of a multi-disciplinary team that lays as the foundation of The neuron in the clinic`s identity connects and transmits information and it is directly represented in the interior concept, through the design elements and more subtle through the space fluidity, through the way natural light connects the various rooms in the hallway and brings to life the invisible connections (the services of a professional multidisciplinary team). The core of the clinic is represented by an imaging center surrounded by perimetral circulation.  Over this perimeter, one of the hallways hosts a waiting room well connected to the 7 medical cabinets in the outpatient area. Day hospitalization and the treatment and investigations areas are oriented towards the pedestrian and green areas, to offer a relaxing atmosphere.

„In Romania, we still design based on old, outdated normatives, from the `70s – which have been slightly updated in the `90s. This is a major challenge for the architects, as today`s patients and medical teams needs have significantly evolved. Every time we aim to bring innovation and design a medical space similar to one in other countries the authorization process is prolonged and many times the innovative solutions tested and used in other parts of the world need to be „negotiated” and detailed through thorough technical reports. Yet the new Neuroaxis clinic is an example that #itcanbedone and we are not discouraged by the system,” architect Raluca Soaita, founder of TESSERACT states. The demand for design services in the private medical sector has significantly increased in the last year, due to the pandemic context and the insufficient coverage of the public sector;  some medical niches will grow in the next period – such as palliative care, geriatrics or medical recovery services, the architect adds.

„We chose to relocate the Neuroaxis clinic in a larger space, in a modern office building in a central area of Bucharest, to extend our patient diagnostic, monitoring and treatment services. The demand is very high on this segment, considering the 10% incidence of the neurology and psychiatric diseases in the general population – about 500.000 patients in Bucharest – Ilfov, Prahova, Arges and the surrounding areas,” states Dr. Dan Mitrea, neurologist and founder of Neuroaxis.