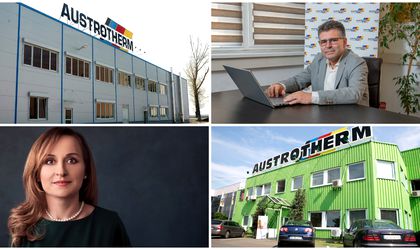 REI Finance Advisors, one of the most dynamic consultancy companies specialized in attracting European funds and state aids for companies with activity in Romania, has successfully managed to get financing for a project worth 3 million euros for Austrotherm Romania, one of the biggest producers of construction materials in Romania.

Earlier this year, Austrotherm decided to extend the production capacity of extruded polystyrene (XPS) at the Roman (Neamț county) plant.

The total amount of the investment was 3 million euros and will go toward expanding the production plant and a modern XPS production line, which will increase the plant’s capacity to 200.000 m3/year. The project was carried out through GD 807/2014, the scheme which provides non-reimbursable financing of 50% of the acquisition cost of the production equipment.

“We have been looking for years at the expansion of the Romanian activity for the two thermal insulation materials we already produce in our country (expanded polystyrene – EPS and extruded polystyrene – XPS). As financial resources are often limited and an expansion of sales in parallel with an investment in increasing production capacity requires a serious financial effort, we have focused on this source of non-reimbursable financing, which offers a considerable reduction in the financial effort needed to make an investment in increasing the production capacity. We do not exclude further expansion of our production capacity, we are also assessing the possibility of applying for State aids to finance these projects”, said  Laurentiu Istrate, general manager of Austrotherm Romania.

Austrotherm has so far accessed State aid through GD 495/2014  – exemption from green certificates, and  GD 807/2014 – which provides 50% non-refundable financing from the cost of production equipment for the Roman plant, Neamt County.

“The construction market is a sector with huge potential for attracting European funds and state aids, and Austrotherm is a successful example, as it has carefully followed the steps needed to implement the financing and the commitments it will make in the coming period. We are not at first collaboration, and it is actually because of the good relationship we have already built on the third project, for which we have already gone through two important steps, and we are confident that in 2021 we will tick off a new financing agreement for Austrotherm. Despite the more difficult period the construction sector is going through, amid the uncertainty in the market caused by the pandemic, using European funds or state aids can be the winner to overcome a certain financial deadlock for any company”, said  Roxana Mircea, Partner at REI Finance Advisors.

“The REI team is made up of professionals who know very well the procedures and methodology to draw up a file for obtaining grants. The greatest advantage is that they master the legislation in the field, and this gives them a great advantage in assessing the project and identifying successful solutions. After the two projects that we have worked on, we decided to continue working together for the third project that we are aiming for, in particular, because of the flexibility, the operational mode, and the effectiveness in supporting the documentation required by the authorities. As the companies generally do not have specialized staff in the organization chart for such projects, I recommend that they be involved with specialized firms to help them get non-reimbursable funds”, added Laurentiu Istrate, general manager of Austrotherm Romania.

Non-reimbursable financing through HG 807/2014, extended for three years: projects can be submitted at any time, and evaluation is done very quickly

The Ministry of Public Finance (MPF) announced in September this year the extension by another 3 years of GD 807/2014, which grants up to 37,5 million euros for start-ups, SMEs and large companies, until 31.12.2023, with the session being open continuously. This means that projects can be submitted at any time and financing agreements will be issued up to 31.12.2023 with the possibility of implementing projects by 31.12.2028.

The projects are evaluated very quickly, in about 3 months, but the companies also have the option to start the investment project immediately after they have submitted the project to the Ministry of Finance – the State Aid Department.

According to revision 4[1] of the Guide for applicants, drawn up on the basis of Government Decision No. 807/2014 on the establishment of State Aid schemes aimed at stimulating investments with a major impact in the economy, as amended and supplemented, a number of additional State aid support measures for applicants, be they start-ups, SMEs or large/multinational companies, have been published.

According to the new document, the most important change was the removal of the notion of “cost standard” limited to 1.650 RON/sqm, so between 10% of the eligible value of the project – Bucharest area (maximum EUR 7,5 million), 35% – Ilfov and West (maximum EUR 26,25 million), Respectively 50% – the rest of the country (EUR 37,5 million) of the actual cost/sqm of the building, which will also allow the financing of hotels, hospitals, and other types of buildings at a higher cost/sqm.

The State Aid scheme aims at regional development by making initial investments in high-tech fixed assets for producing high value-added products, irrespective of the size of the beneficiaries.

The value of an investment project must be at least RON 4.5 million. This value was determined by reference to an equivalent value of about 1 million euros (calculated at a rate of 4,5 lei/euro). The maximum budget of the scheme is RON 4,007 million, the equivalent of about 925 million euros.