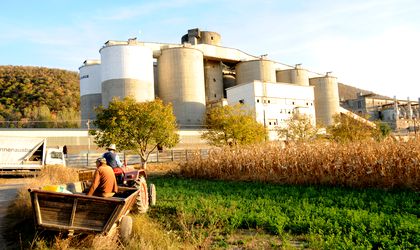 The Competition Council’s analysis of the cement production and marketing sector in Romania indicates an atypical situation, in which cement producers maintain their market shares approximately equal and stable over time, thus increasing the risk of emerging forms of activity coordination.

Cement producers have already been fined almost EUR 30 million in 2005 for concerted practices of setting prices for cement sales.

The risk is even greater as the fluctuations in market shares are low and there are no changes in the industry hierarchy. This raises suspicions in terms of competition, especially as the three cement producers have different production capacities, and the degree of their use is deeply asymmetrical: the manufacturer of cement with the highest production capacity in operation has the lowest degree of use of it.

These conclusions result from the completion of the sector inquiry into the production and marketing of cement in the period 2013-2017, carried out in order to have a clearer picture of its operating mechanisms, to identify any malfunctions in the sector and to formulate recommendations that will lead to their elimination for the purpose of intensifying competition.

Both the limestone fillet and the binders Hydraulics are produced in cement plants. Following the analysis carried out in this sector, the Competition Council found that there could be coordination between the three producers at the level of the assortments produced and delivered for the purpose market sharing, these cement manufacturers having the ability to keep some captive customers so as to maintain symmetrical market shares.

It has also been observed that the prices of certain types of cement offered by producers had the same evolution, which may be an indication of the coordination mechanism through which the main market companies manage to maintain symmetric market shares.

Each of the three leading producers in Romania sells cement in almost all regions of the country, but the preponderance of customers are located in the area 350 km around the point of sale. Thus, the possibility of dividing can not be eliminated of the geographic market between cement producers, the distance criterion being extremely important in choice of cement supplier.

In view of these elements, the Competition Council launched in October an investigation into a possible anti-competitive understanding between Holcim Romania, CRH Romania and HeidelbergCement Romania, achieved by dividing the production and marketing of cement in Romania, from the perspective of market shares and / or products offered on the market, limitation or control of production, marketing, technical development or related investments with possible coordination of the pricing policy of the companies involved.

In the sectoral survey, the regulations on how to obtain were also analyzed licenses for the exploitation of the quarry aggregates and recommendations have been made. Thus, the Council Competition found that the grant procedure by the National Agency for Resources Minerals of exploitation permits in the case of rocks usable in construction and peat or gold from alluvium could constitute a limitation of market access and, implicitly, restricting competition, as it is attributable to the first applicant, without taking into account other criteria.

Also, the long period (maximum 20 years) for which the exploitation license is granted, as well as the right of extension, unlimited, for successive periods of how many 5 years, blocks access to the market and may lead to its closure over a period of time indefinite or to the depletion of the exploitable resource for which the license was granted. Consequently, the competition authority recommends the introduction of provisions in the draft modification of the Mine Law in the sense of reducing the period for the exploitation license and its prolongation.