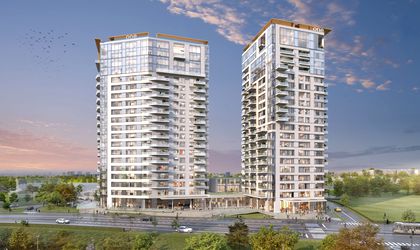 Located in the northern part of Bucharest, the complex is formed by two 77-meter-high towers with panoramic views of Floreasca and Tei Lakes. One Verdi Park is shaping the real estate market in the Romanian Capital as an innovative project, not only by the quality of the technologies used, but also by the unique design signed by the architect Marius Călin, leading X Architecture & Engineering office.

While the south tower at One Verdi Park is almost entirely pre-contracted, apartments in the north tower have recently become available for sale. These will also include an interior design project created by Lemon Interior Design, one of the best emerging interior designers in Europe, awarded in London at International Property Awards in 2020. Lemon team will also design the 5-meter-high lobbies of the two towers, with a contemporary approach meant to emphasize the architectural elegance and cosmopolitan vibe of the building’s entrances.

One Verdi Park continues the community-centred concepts that the developer is well known of and will offer great facilities for the future residents. A top restaurant with a generous terrace, but also shops, market, café, or a beauty salon will be located on the ground floor, among other facilities specially designed for this location. These spaces are integrated in an urban plinth – the promenade of all daily ceremonies: housing, transportation, creativity, services, leisure for teenagers, young families, retirees. In addition, due to the special positioning of the terraces opening onto the entire width of the living rooms (minimum 4 meters) and the dominance of glazed surfaces to the upper floors, the apartments will offer future residents panoramic views over Floreasca and Tei Lakes.

Read more about
One United Properties raises EUR 51.5 million for development in the largest share capital increase of a listed company
read more

In addition, the project includes the development of green areas, which will take up at least 30% of the total land area at ground level and also a small private park above the part connecting the two towers, only accessible to its residents. This suspended garden planted with coniferous trees and shrubs, deciduous and climbing plants, will be used as a meeting and playing place by all the people who will live in this ensemble. Barbu Văcărescu Street will be the main access to the complex, and the area outside the boulevard will be used as a pedestrian space. In addition, the residents will have easy access to the bus and high-speed tram stations. One Verdi Park is also defined by its special location, because in addition to the facilities of the project, the future tenants will be in the vicinity of a sports complex with gym and swimming pool and other restaurants.

Both One Verdi Park towers will continue One United Properties’ philosophy of developing properties that meet the requirements for green buildings, in line with the company’s constant concern to provide more than housing, namely, to redefine urban housing in apartment buildings, to reimagine the art of living.

One United Properties expands the rental portfolio by acquiring a new office building,...