AFI Europe is starting, in Arad, the construction of its first retail park in Romania 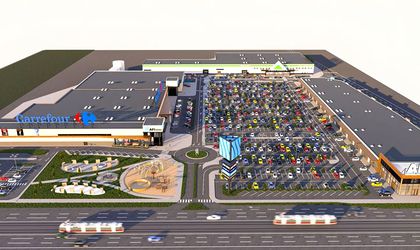 The representatives of AFI Europe and Arad City Hall laid the foundation stone of the first modern retail park in Arad, which will be built in the center of the city. AFI Arad will be the first retail park to be developed by AFI Europe in Romania.  The company previously developed 3 large scale shopping centers in Bucharest, Brasov and Ploiesti.

As a novelty for Arad, McDonald’s opened, as part of the project, its first Drive-Thru restaurant of this type in the city, on an area of ​​148 square meters. Other future tenants of the AFI Arad retail park that will arrive for the first time in Arad are Carrefour hypermarket (with a leasable area of ​​5,800 sqm),the DIY store Leroy Merlin (with a leasable area of ​​9,000 sqm), Media Galaxy (3,000 sqm) and Decathlon (2,000 sqm).  The mix of tenants also includes international brands such as Sinsay, Cropp. In addition, visitors will enjoy the offer of mobile operators and several other well-known brands.

The retail park will be open to the public in the second half of 2023.

The start of the project was symbolically marked today, by laying the foundation stone and burying a time capsule at the base of the future building, in the presence of the Mayor of Arad, Mr. Călin Bibarț and representatives of AFI Europe Romania.

“I am happy to take part today in this important moment for us and for the residents of Arad, the start of the construction of AFI Arad retail park, which thus brings an important investment to the city and contributes to its modernization. The community of Arad will benefit from a new meeting point in a generous space where beautiful moments, the pleasure of shopping and quality entertainment can be shared with friends and family. Before long, we will invite the city’s residents to take part in a modern shopping experience in a retail park that brings top brands and the most attractive leisure spaces”, said Doron Klein, CEO of AFI Europe Romania and the Czech Republic,

“I can only be happy that Arad is, once again, a trailblazer. This retail park, which is to be built on a land plot that has been unused for many years, it represents a premier from many points of view. It will be the first retail park in Romania, developed by AFI Europe, an internationally renowned company. Moreover, I am excited because this retail park will be a novelty for the people of Arad, because here they will find brands that have not been available locally up until now.  At the same time, it will be located in the city and not on the outskirts, which will be an advantage for every Arad resident. And, last but not least, I am glad that our city is once again proving to be an attractive center for investors, which guarantees numerous possibilities for future development”, said Mayor Călin Bibarț.