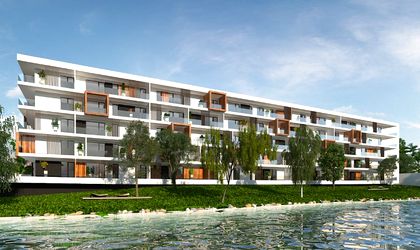 The first project has been completed and sold, while for the second one, the works will start in July.

“The accessible boutique residential area is a niche that I have spotted. It was because the market is polarized: on the one hand, there are cheap developments, with small flats without design, or the high-class communist block of flats re-used , with no identity, and there are developments that have been designated as premium, extremely expensive, almost inaccessible to the vast majority of the population. Affordable boutique retail is a concept that focuses on well-informed shoppers, mindful of all details, who want an alternative to two types of buildings that dominate the market,” said Iusut.

Residential Complex Parc du LAC – Baneasa – Pipera – La Gloire will be located in the Baneasa/Pipera area, right on the shore of Valea Saulei. It will include 47 apartments, between two and four rooms, with extensive terraces and underground parking.

The adjacent green space represents over 60 percent of the surface area of ​​the complex. Terraced areas will range from 15 square meters to 110 square meters. The deadline for completion of the Residential Complex Parc du LAC – Baneasa – Pipera – La Gloire is October 2019 and the the prices of an apartment vary from EUR 79,999 + VAT up to EUR 177,999 + VAT.

The investment in the first residential boutique complex (Pipera Vlad Tepes – La Gloire) amounted to 2.5 million euros, much of it being allocated to land, execution itself and design. The residential complex comprises 31  apartments , all sold.