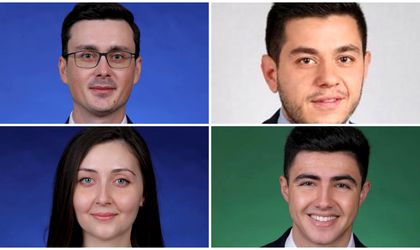 Following the recent addition of Bogdan Bibicu as a new partner at the beginning of November, Wolf Theiss continues its Bucharest office expansion by also adding four new lawyers to its Corporate / M&A team.

Mihai Coadă joins Wolf Theiss as a Senior Associate. He has over 10 years of experience as a lawyer, representing a wide range of clients, such as private equity firms, strategic investors and, entrepreneurs on significant M&A transactions in Romania (both on the sell side and on the buy side). Mihai has assisted clients in implementing numerous corporate changes, including group restructurings and reorganizations He has also advised clients on various financial regulatory matters such as legal considerations in providing financial services in the CEE post-Brexit and cross-border financial services under MiFID II.  Mihai was previously a Managing Associate at a leading regional law firm and holds a Bachelor of Law from the Bucharest University School of Law.

Alexandru Vlăsceanu has joined Wolf Theiss as an Associate. Prior to joining Wolf Theiss, Alexandru was part of the Kingfisher Group, Kingfisher Plc. – Corporate Function (London) where he covered a wide range of areas, including Corporate, M&A, Competition, Commercial Contracts, Capital Markets, Dispute Resolution, Data Protection, Compliance and Regulatory. Alexandru graduated from the University of Alexandru Ioan Cuza, Faculty of Law in 2011 and in 2013 he was admitted to the Bucharest bar, following the National Institute for Lawyer Training.

Elena Ionaşcu joins Wolf Theiss as a Junior Associate. Previously, Elena worked as a Legal Advisor at the Chamber of Commerce and Industry of Romania and prior to that, she was Judicial Counselor at the National Institute of Magistracy, the First Instance Court, the First Instance Court – Prosecutor’s Office and the Directorate for Investigating Organized Crime and Terrorism. Elena holds a Bachelor of Law and Master of Law from the Bucharest University School of Law. In 2019 she passed the Bucharest Bar Exam.

Vlad Catană joins Wolf Theiss as a Junior Associate. Vlad has a Bachelor of Law at Bucharest University School of Law. Prior to joining Wolf Theiss, Vlad was a legal intern at two local law firms. He was also a volunteer for the Red Cross and a Fundraiser for the benefit of “Clubul Liderii Mileniului Trei” (Millennium Three Leaders Club).

“I congratulate and warmly welcome these four talented lawyers to our Corporate / M&A team. Excellence and professionalism are the core values ​​of this Firm and these recent additions are a testament to that. We boast one of the largest M&A teams in Romania, yet our goal is to further grow our transactional practice and increase Wolf Theiss’ market presence in order to best serve the legal needs of our clients“, adds Ileana Glodeanu, Partner and Coordinator of the Corporate / M&A practice in the Wolf Theiss Bucharest office.