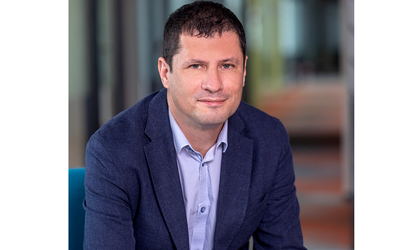 Sodexo BRS Romania, the market leader in the extra-salary benefits and rewards services sector for the quality of life in Romania, named Marius Popescu as National Sales Director starting November 1st, 2021. The manager has been working at Sodexo Romania since 2000, joining the company early after graduating from college.

Marius Popescu (44 years old) will lead the entire sales team in Romania and will be responsible for developing the strategy of sales in Sodexo, defining and implementing specific action plans to continue to grow the clients’ portfolio and motivating employees so that they achieve their goals. He will report to the CEO and will be a member of the Board.

The manager started his career at Sodexo Romania in the Customer Relations department, as a specialist, he moved on to the Sales Department, becoming a senior sales representative, then Area Sales Manager, and National Telesales Manager. For the past two years, he has been a Regional Sales Manager for the small and medium business segment.

Marius has made a key contribution to the implementation of new sales models, including the implementation of the inside sales and the career plan in the Telesales department. He has also digitized the sales process, ensuring better use of data in the platforms and informational systems used.

Marius Popescu is a graduate of the Academy of Economic Studies in Bucharest (2000) and attended the management courses of the Open University Codecs.

“I am happy to announce the promotion of Marius Popescu to the position of National Sales Director. As a member of the Executive Committee, Marius will be responsible for the development and execution of the sales strategy. His experience of over 20 years in Sodexo gives him a broad perspective and in-depth understanding of our business and goals. Marius’ initiatives have significantly contributed to optimizing Sodexo’s sales processes, as well as increasing the performance of our teams. Marius is a good model and a good leader, tenacious and dedicated. We wish him great success and are happy to have him in the management team of Sodexo,” said Manuel Fernandez Amezaga, CEO of Sodexo BRS Romania.

“I am looking forward to the beginning of this new stage of my career at Sodexo. I will continue the innovation and digitization processes we have initiated. My priority is to build a strong team, where individual development goals are set from the start and are pursued all along. I believe in building a sales culture that streamlines the entire process and provides our customers with a memorable experience,” said Marius Popescu, National Sales Manager of Sodexo BRS Romania.