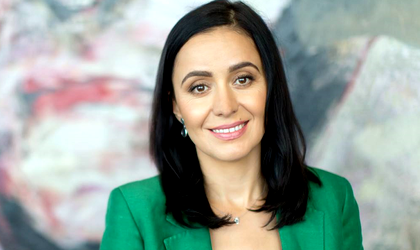 Globalworth Foundation, the non-profit organisation through which office market leader Globalworth will use to consolidate the group’s CSR projects, has appointed Georgiana Iliescu as its Executive Director.

“Caring for future generations and for special needs communities are two of the causes that inspire me every day to develop positive-impact initiatives at a social level. I’ve been asked many times whether I’ve set out to change the world. My answer always is that, if you can’t help 100 people, at least help one person, and I think that perseverence is the power people have to build a better future. That is why I am honoured and glad to be part of the team at the Globalworth Foundation, an organisation whose values I identify with and that continues Globalworth’s tradition of supporting and investing in initiatives that can change people’s lives for the better,” said Georgiana Iliescu.

With over 15 years of experience in implementing and coordinating social impact projects, Iliescu joins the Foundation to consolidate the organisation’s mission to build projects on three strategic pillars – people, places and technology, according to a statement by the Globalworth Foundation.

Previously, Georgiana Iliescu was a Senior Project Manager in the Vodafone Romania Foundation and a member in its Administrative Board. In her 12 years at the organisation, she coordinated a series of strategic project to improve infrastructure in several activity areas, inlcuding the refurbishment of blood transfusion centres or hospitals, as well as actions to promote new technologies. Besides specific initiatives in education, healthcare or civic tech, Georgiana Iliescu also worked on volunteering and fundraising projects, developed apps and internal corporate volunteering programmes and coordinated projects for social housing.

Before joining the Vodafone Foundation, Iliescu was a Project Coordinator for the Princess Margaret of Romania Foundation, where she set the fondations for the development of the intergenerational community centres, and contributed to the implementation of social initiatives in the Ratiu Foundation as Community Manager.