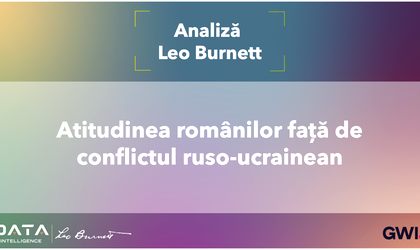 Since the beginning of the ongoing Russian-Ukrainian conflict, the world’s attention has been focused on the situation in Ukraine and the economic sanctions imposed on Russia. Opinions are divided and attitudes seem to vary depending on a variety of factors. How Romanians see this conflict and its repercussions, we find out from Leo Burnett analysis carried out on data from Global Web Index (GWI) survey.

Irina Savu, Data Intelligence Director, Leo Burnett: “We found that Romanians are more concerned about the repercussions of the conflict on the economy and living standards than the likelihood of Romania going to war. In terms of measures taken so far, only one in three Romanians believe that economic sanctions have the power to discourage further war and more than 70% believe that NATO and the EU need to be more involved, but not with armed forces”.

Concern about the evolution of the current situation

63% of Romanians are concerned about the prospect of war escalating globally or nuclear weapons being involved. However, only half consider this scenario a real threat. Also, as regards Romania’s possible involvement in the war using armed forces, almost one in two Romanians (43%) consider this a cause for concern. 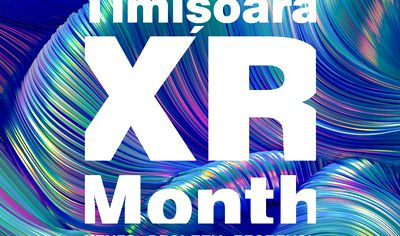 Read more about
XR Month: Over 30 thousand scans in one month of augmented reality in Timișoara
read more

As for the conflict-related effects, Romanians are most worried about the impact on personal finances (73%), with more than half having already reduced their current spending. In comparison, people in the United Kingdom had the lowest level of such concern (only 31% of respondents).

Other issues that concern Romanians the most are: the dependence on Russian oil and natural gas (60%), the evolution of bank interest rates (50%), and the impact of this conflict on the mental health of the population (57%).

73% of Romanians believe that the EU and NATO should be more involved in this conflict. But when it comes to active participation in the war with armed troops, only one in three Romanians think NATO should send troops to Ukraine, while 26% of respondents think Romania should get involved with armed forces. In comparison, one in two respondents in Spain agree with such measures.

Of the citizens of the countries surveyed, Romanians are the most confident about the effectiveness of economic sanctions in deterring the Russian offensive, but not in a very large percentage – 35%. In terms of opinion about the two countries directly involved in the conflict, 26% of Romanians believe that Ukraine should be welcomed into the EU, while 28% believe that the Russian population should not be punished for the armed measures taken by the country’s leadership.

As for the measures taken by Romania, 75% of Romanians believe that we should receive refugees and 65% that we should send financial and material aid.

When it comes to companies and brands, 65% of Romanians expect them to act on conflict-related issues: to provide facilities to refugees (56%), to withdraw their commercial activities from Russia (55%) and to donate funds or materials and products (47%).

In addition, there is an impact on the image of brands that have been involved in various fundraising and refugee relief actions. Thus, 21% of Romanians said that they prefer to buy products from such brands, and 47% intend to take an active interest in this issue.

Discussions with relatives and friends are the main source of information among respondents (63%), followed by TV (59%) and social media (56%). Half of the respondents said that they started watching TV more often than they did before the Russian-Ukrainian conflict started, in order to follow information about it.

“Romanians’ biggest concern is how the war will affect their financial situation, which is already evident in the fact that more than half have reduced their monthly spending.

Although people are more careful about spending during this period, our recommendation to brands is to keep communicating. 63% of Romanians expect brands to get involved and assert their position on this conflict. This is an important time for brands to be present and show that they are anchored to the realities of society”, said Maria Ilea, Data Strategist, Leo Burnett Romania.