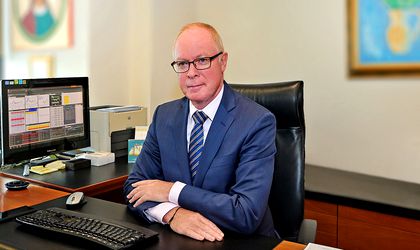 Dominic Bruynseels, the Executive Chairman of First Bank, will leave his function starting August 8, 2019, after only one year in the top position.

“Over the past 12 months, First Bank has undergone a number of significant changes: repositioning after the acquisition of Piraeus Bank Romania, change of brand identity, optimal sizing process, Bank Leumi Romania acquisition, and a series of internal and of important projects, the results of which will soon be seen. Now I want to focus on important personal projects, so I’m leaving the current position to do it,” says Dominic Bruynseels.

Although he didn’t mention what are the projects he will pursued, it is worth remembering that Dominic’s wife, Ramona Ioana Bruynseels, is running for the president of Romania in the November elections, as a candidate for the Party of Humanist Power (Partidul Puterii Umaniste).

US Investment Fund J.C. Flowers & Co. has identified and designated the successor for this function. At this moment, internal and external procedures are in place, specific to the formal appointment and take-over of the mandate. The nomination will be announced shortly after completion of the required formalities.

“I want to thank Dominic for both the energy and involvement he has shown in the past 12 months, and for bringing J.C. Flowers in Romania. First Bank is a fast-growing brand and we will continue to build on our positive premise. We want Dominic to be very successful in everything he wants, “says Nicolae Danila, Chairman of the Board of Directors First Bank.

Headquartered in Bucharest, First Bank offers a wide range of products and services to both local and international clients, including retail, SME and corporate banking. First Bank operates through 59 branches with 1200 dedicated employees and has approximately 130,000 active clients.