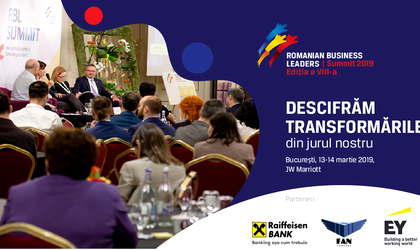 First there was the steam engine, then the lightbulb and the first phone ringing. Later, the first personal computer was connected to the internet. We are now in the era of artificial intelligence (AI). How ready are we for it? A few hints on what’s coming and more answers to this question during the Romanian Business Leaders Summit 2019 – Society 4.0. The lenses we look through to the future, moderated by Dan Oros, Romania Marketing Manager at Google.

In the 80s, AI was a hot topic for science-fiction films. Today it’s become a palpable reality and a certain future. Many are afraid that a “supreme” form of intelligence that knows how to make decisions on its own could endanger humanity. For now, general AI – the one that makes people worried – remains an ideal, and its birthdate remains unknown.

First, it might be useful to find out where Romania stands, at the individual and company level, in the context of the fourth industrial revolution, as the current historical period has been called, being market not only by AI, but also by robots, 3D printers, big data or Internet of Things.

As a side note, industrial revolutions have been counted since the 18th and 19th centuries, once the steam engine was invented. The evolution continued between 1870 and 1914 with the advent of the first technologies such as the internal combustion engine, the telephone, the lightbulb or the phonograph. We’re more familiar with the third revolution – the digital one: the first personal computer appeared in the 80s, followed by the internet and the development of communications. Back then, people were already researching artificial intelligence, but until five years ago or so, AI didn’t have any clear applicability.

IN LAST PLACE. If we look at how widespread social media and mobile phones are, we could assume that Romania is the blessed land of technology. In reality, the DESI index (Digital Economy and Society Index) that measures the degree of digitalization of countries, places us last in the EU. The index is based on five factors related to connectivity, digital skills, the population’s internet use, the integration of tech into business and the digitalization of public services.

With one exception – connectivity – we are doing badly. Not even for connectivity should we let ourselves be deceived by the idea that Romania has one of the highest internet speeds in the world. We’re doing pretty well for broadband connections, indeed – a niche of communications systems – but that’s all.

We also notice a huge discrepancy between the way individuals use technology and the degree of digitalization among companies. Most citizens use the internet (not actively, though), but companies are way behind. Of the 5-600,000 businesses in Romania, only a quarter are on Google Maps. It’s a simple thing that anyone can do and it’s free of charge, but a lot of people think that Google puts you on its map itself.

OPTIMISM. As we know, Romania is a country of extremes. Despite ranking last in the DESI index, we still have very valuable technology companies. We’re talking about UiPath (the first Romanian-born unicorn), Bitdefender or eMAG, which also reached a billion dollars in value.

And these aren’t the only elements that lead us to be optimistic. The beauty of AI is that it can help us burn through the steps and “leap frog” ahead to reduce the gaps between us and the digitally-evolved societies. Let’s take medical services as an example. Our doctor deficit could be compensated by automating processes that could free up more time for the existing medical personnel.

It’s of course premature to talk about a fourth industrial revolution, but we’re already seeing the first signs of it. There are companies using image-recognition algorithms (in e-commerce, for instance), speech to text or text to speech, which are forms of AI. It’s premature because, for now, entrepreneurs don’t see the medium-term benefits. They can’t take a step back and see that things that aren’t priorities right now would greatly help their business in five years.

The first step they should take towards the fourth industrial revolution is a proper management of databases, because AI can’t work without data. Since there wasn’t enough data and processing power until now, AI was shelved for four of five decades. And it doesn’t even take major investments. Many algorithms used for AI are available on the internet for free. The paradox of our time is that “knowledge is abundant on the internet; the desire to learn is scarce.”

To those who are afraid that AI could change the world for the worse, we say don’t worry: AI is a tool like any other. It depends on how we, individuals or companies, decide to use it.